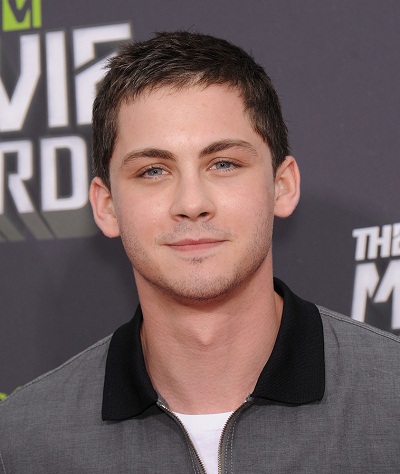 Lerman in 2013, photo by DFree/Bigstock.com

Logan Lerman is an American actor.

Logan’s paternal grandfather is Max Lerman (the son of Jacob/Jakob Lerman and Erna Popower). Max was born in 1927 in Berlin, Germany. Jacob was a Polish Jewish emigrant, born in Kolbiel, Poland, the son of Abraham/Abram Lerman and Rachel (possibly Rekla Gurfinkel). He founded the family’s company, Lerman & Son, which now works in orthotics and prosthetics, in 1915. Erna was born in Berlin, Germany, of Polish Jewish descent, and was the daughter of Mordka/Max Popower/Pepower and Sura/Sara Blumberg, who were born in Warsaw. Because of anti-Jewish persecution in Germany, Max Lerman and his family moved to Shanghai, China, where Max was raised. In the late 1940s, after World War II was over, they settled in California.

Logan’s paternal grandmother was Mina Schwartz (born Neja Schwartztuch y Gomer, the daughter of Abraham Schwartztuch and Zisla Gomer). Mina was born in 1933, in Mexico City, Mexico, to Russian Jewish parents. Her family had moved to Mexico at some point after 1927 and before Mina’s birth. They left Mexico for the United States in 1946, settling in California. In the United States, they changed their surname from Schwartztuch to Schwartz.

Logan’s maternal grandfather was Jay/Jake Goldman (the son of Aaron Goldman and Blanche Brum). Jay was born in 1933 in Poland, the son of Polish Jewish parents. Jay, his sister, and his parents, survived the Holocaust, and moved to the U.S. after World War II, in the late 1940s. Aaron’s mother’s maiden name was Gingold. Blanche was born in Dlugosiodlo, the daughter of Jay Brum and Rifra Guzman/Gussman.

Logan’s maternal grandmother was Susan Louise Freeman (the daughter of Lincoln Abraham Freeman and Molly Eva Lazareck). Susan was born in 1940 in Los Angeles, California. Susan’s father, who was born Louis Abraham Freedman, was a Jewish emigrant from Eastern Europe, likely from near Lemberg/Lviv, Ukraine, who had changed his first name to Lincoln and his surname to Freeman, becoming known as Lincoln A. Freeman; he lived in Winnipeg, Canada, before settling in Los Angeles. Louis was the son of Israel Samuel Freedman and Rebecca/Rebecka Lillian/Lilly/Lillie Brodsky. Susan’s mother, Logan’s great-grandmother Molly, was born in Winnipeg, Manitoba, Canada. Molly’s father, Abraham Jacob “Jack” Lazareck, was a Jewish emigrant who was born, c. 1879, in Poland, and moved to England with his family, c. 1886; Jacob later moved to Canada, c. 1901. Molly Eva Lazareck’s mother, Chana-Etta “Emma”/Anna Zelbovitz, who was Logan Lerman’s matrilineal great-great-grandmother, was a Jewish emigrant from Lithuania. Chana-Etta’s family settled in Winnipeg in the early 1900s.

It is also possible that Logan is related to actors Maggie Gyllenhaal and Jake Gyllenhaal (through the Gyllenhaals’ mother, who is Ashkenazi Jewish). Logan’s Zelbovitz line may lead to common ancestors with Maggie and Jake’s Silbowitz line.

2010 article about Logan Lerman in an Israeli magazine – http://www.nrg.co.il

Lerman in 2011, photo by DFree / Shutterstock.com