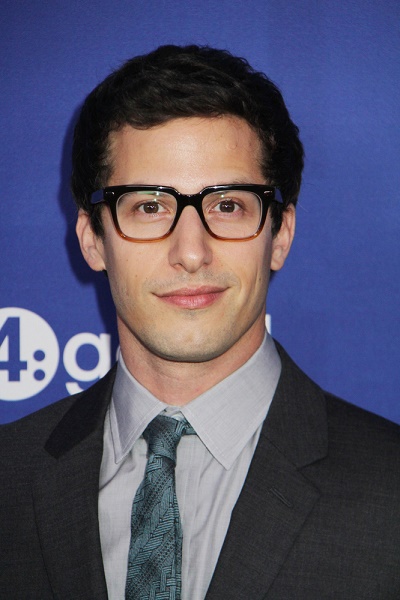 Samberg in 2014, photo by Prphotos

Andy Samberg is an American actor, comedian, singer, rapper, writer, and producer. He is a member of the comedy group The Lonely Island, along with Akiva Schaffer and Jorma Taccone. He has starred in the films Hot Rod, I Love You, Man, Celeste and Jesse Forever, and Palm Springs, among others.

Andy is the son of Marjorie Isabel “Margie” Marrow and Joseph Samberg. Andy is married to musician Joanna Newsom, with whom he has a daughter.

Andy’s father is from a Jewish family. Andy’s mother was adopted. Her adoptive parents were both Jewish.

On the show Finding Your Roots with Henry Louis Gates, Jr. (2019), Andy discovered the identities of his biological maternal grandparents, through a combination of DNA testing and genealogical research. Andy’s mother’s birth parents were a Sicilian (Catholic) father and a German Jewish/Polish Jewish mother, who had met around Berkeley in the mid 1940s.

A DNA test taken by the show stated that Andy’s genetic ancestry is approximately:

Andy’s paternal grandmother was Sylvia Conviser (the daughter of Elias/Eli Conviser/Conweser and Fannie/Fanny Klukoff/Kluskoff/Klikoff). Sylvia was born in Manhattan, New York, to Russian Jewish parents. Elias was the son of Alexander Conweser and Debora Charnas. Fannie was born in Minsk, the daughter of Loui Klukoff and Ennie Roareer.

Andy’s mother was adopted, by Alfred J. Marrow (Alfred Josephon/Jay Marrow, the son of Isadore/Isidor Leo Marrow and Rebecca Green) and Monette “Monte” Courod (the daughter of Paul Courod and Henrietta Cutler). Alfred J. Marrow was born in New York, and was an industrial psychologist and philanthropist, who served as an executive chair of the American Jewish Congress. Monette was born in either Russia or Missouri. The name Marrow was Marovinski several generations back.

Andy’s biological maternal grandfather was Salvatore/Samuel “Sam” Maida (the son of Gaetano “Tomas” Maida and Calogera/Catherine Trapani). Salvatore was a Sicilian (Catholic), and was born in Villadoro or Nicosia, Enna, on the island of Sicily, Italy. His family was from Alimena. He was an artist. Gaetano was the son of Salvatore Maida and Vincenza Oddo. Calogera was the daughter of Antonino Trapani and Maria Antonia Nasello.

Andy’s biological maternal grandmother was Ellen Philipsborn (Ellen Lora Yolande Philipsborn, the daughter of Arthur/Artur Philipsborn and Regina Schöntal/Schönthal). Ellen was a German Jew, who was born in 1922, in Nowawes, Brandenburg, Germany. She was a painter and child psychologist. She moved to the U.S. in 1938, to escape the Nazi regime. Ellen’s aunt, father’s sister, Gerda Philipsborn, was a prominent singer in India, where she moved to. Andy’s biological great-grandfather Arthur was born in Kiel, Schleswig-Holstein, Germany, the son of Jacob “Koppel” Philipsborn, who was born in Bentschen, now in Greater Poland Voivodeship, Poland, and of Ida Mond. Andy’s biological great-grandmother Regina was born in Berlin, Brandenburg, Germany, the daughter of Abraham Schöntal/Schönthal/Szajntal, from Działoszyce, Poland, and of Leonore “Lea” Deutscher, who herself was from Kraków, Poland.

Genealogy of Andy Samberg (focusing on his mother’s side) – http://wc.rootsweb.ancestry.com

Genealogies of Andy’s mother (focusing on her father’s side) – http://familytreemaker.genealogy.com
http://worldconnect.rootsweb.ancestry.com