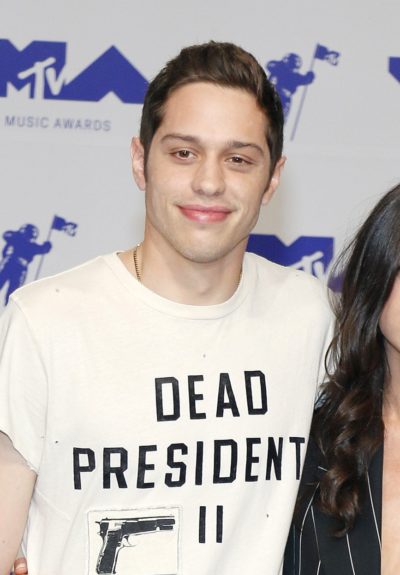 Davidson at the 2017 MTV Video Music Awards held at the Forum in Inglewood, USA on August 27, 2017. photo by Starfrenzy

Pete Davidson is an American comedian, actor, writer, and producer. He was a cast member on the show Saturday Night Live, and has starred in the film The King of Staten Island.

Pete is the son of Amy (Waters) and Scott Davidson (Scott Matthew Davidson). Pete’s father, a firefighter, died on 9/11. He was last seen running up the stairs of the Marriott World Trade Center.

Pete’s mother’s roots are Irish (at least three quarters), along with Scottish, and English and German.

Pete has stated that he took a DNA test in 2017, and was surprised to find out that his DNA included:

Pete was raised Catholic. Both his parents were/are Catholic by religion. He has said that he did not know of his father’s Jewish heritage before taking the test.

…I’m a straight white dude but for some reason I look like every other race mixed together… I use it to my advantage. I feel like as soon as people find out I’m just a white dude, I’ll start losing work. They’ll be like, “Aw, he’s not special.”

Pete’s paternal grandmother is Carla Kaiser (the daughter of Michael Patrick Kaiser and Edna May Rosenthal). Michael was the son of John Lawrence Kaiser, who was of German and Dutch Jewish descent, and was Christian by religion; and of Josephine Bianco, whose own parents, Melchiore/Michael Bianco/Biancaccio and Carmela Pupello, were Italian, from Bivona, Agrigenti, Sicily. Pete’s great-grandmother Edna was the daughter of Jacob Rosenthal, who was of Dutch Jewish and German Jewish descent, and of Mary/May/Mamie Young, who had German, English, Scottish, and Irish ancestry. Edna was Christian by religion.

Pete’s maternal grandfather is Peter Michael Waters (the son of Francis Joseph Waters and Mary Elizabeth Keating). Pete’s grandfather Peter was born in New York, and is of Irish ancestry. Francis was the son of James T. Waters and Mary A. O’Rourke. Pete’s great-grandmother Mary Elizabeth was the daughter of Peter M. Keating, who was born in Skerries, Dublin, Ireland, and of Margaret M. Corrigan, who was born in Robinstown, Ballivor, County Meath, Ireland.

Pete’s maternal grandmother is Rebecca A. O’Keefe (the daughter of Robert Joseph O’Keefe and Marjorie Elvira Wylam). Robert was the son of Joseph James/O. O’Keefe and Rebecca Teresa Jones, who were born in New York, both of them to Irish parents. Marjorie was the daughter of Charles Frank/Francis Wylam, who was born in Colorado, and had English and German ancestry; and of Martha Margarette Kerr, who was Scottish, from Lanarkshire. 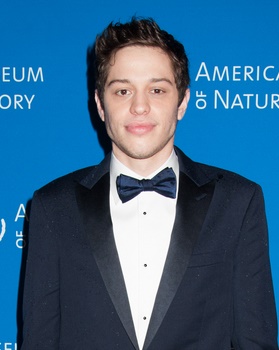 Davidson in 2015, photo by Prphotos.com

Genealogy of Pete’s father (focusing on his own mother’s side) – http://worldconnect.rootsweb.ancestry.com

Genealogy of Pete’s maternal great-great-grandfather, Charles Frank/Francis Wylam (focusing on his own mother’s side) – http://records.ancestry.com