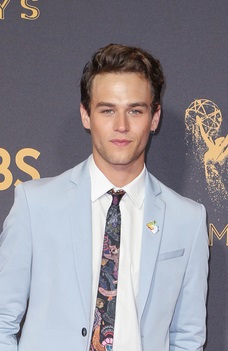 Brandon Flynn is an American actor. He is known for his role as Justin in the series 13 Reasons Why.

Brandon has stated that he is Jewish.

Brandon’s father is somewhere between one eighth and three eighths Ashkenazi Jewish ancestry. His other roots are English, Irish, and Scottish.

Brandon’s paternal great-great-grandfather Abraham Samuel Dzialynski was among the first Jewish people to be born in Florida, having been born, in 1876, at Fort Meade, Polk, Florida.

Brandon’s paternal grandfather was Maurice Arthur Flynn (the son of Gertrude Delinski). Maurice was born in Florida. Gertrude was born in Florida, the daughter of Abraham Samuel/J. Dzialynski/Delinski and Ellalu Lee Green. Abraham was Jewish, and was the son of Philip Dzialynski and Mary Cohen, who were born in Poland. Brandon’s great-great-grandmother Ellalu was the daughter of William Randolph Green and Antoinette Virginia VanZandt/Vanzant. Brandon’s great-grandmother Gertrude Delinski was first married to Harold Arthur Rainess, who was Jewish. She later re-married to Harry Wiseman Flynn. It is not (publicly) clear which of the two was Maurice’s biological father, though Maurice shared a middle name with Harold and a surname with Harry.

Brandon’s maternal grandmother was Elaine Fuller (the daughter of Paul Albert Fuller and Regina Theresa Hope). Elaine was born in Ohio. Paul was the son of Albert B. Fuller, who had English and Scottish ancestry, and of Orlene Money/Morey. Regina was the daughter of Edward C. Hope and Mary Anne Walsh, and was of Irish descent.

Brandon’s maternal grandfather is George Henry Soulé (the son of Edward Stanley Soulé and Ann/Anna/Annie Doris Schampan). George was born in Ohio. Edward was born in Pennsylvania, the son of George Soule and Hattie Lengberg/Lenzberg, who were both the children of German Jewish immigrants. Brandon’s great-grandmother Ann was born in Pennsylvania, the daughter of Hyman Schampan, who was a Russian Jewish emigrant, from Prorence, Plock, and of Pauline Pulvermacher/Powdermaker/Pulnermacher, who was born in Honine, in the Poland-Russia area, to a Jewish family, and then moved to Liverpool, England, and then the U.S.

A picture of Julius and Ruth can be seen here.

Genealogy of Brandon’s mother (focusing on her mother’s side) – http://www.spectorandsons.com