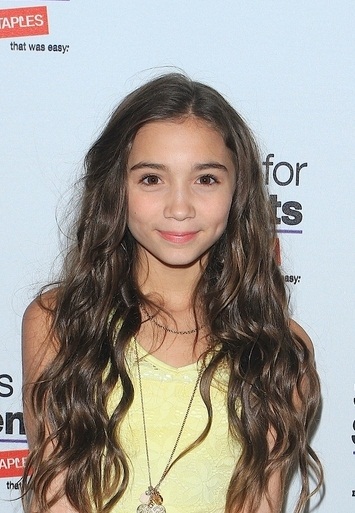 Blanchard in 2013, photo by PrPhotos

Rowan Blanchard is an American actress. She has starred in the film Spy Kids: All the Time in the World, and on the series Girl Meets World and Snowpiercer, among others.

Rowan’s paternal grandfather, an emigrant from the Middle East, had Armenian, Lebanese, Moroccan, and Syrian ancestry. The rest of Rowan’s ancestry is English, German, one eighth Portuguese, and smaller amounts of Swedish, Danish, and Norwegian.

Rowan posted a photo of her family on Instagram, and said:

My great grandfather (left), Armenian great aunt (middle) and grandfather (right). My great grandmother came to America from Armenia after being chased out during the Ottoman Empire. Today marks the 100th Anniversary of the #armeniangenocide. 1.5 million Armenian lives were lost, and still people hesitate to acknowledge what happened in 1915. #ProudToBeArmenian #justice #turkeyfailed

She was named Rowan after a character in Anne Rice’s novel The Witching Hour.

Rowan’s paternal grandfather is Edmond Joseph Boulbol (the son of Joseph Boulbol and Mary, likely Mouradjalian). Rowan’s great-grandfather Joseph was born in Syria, the son of Constantine/Constantino Boulbol and Margaret/Goura Kassar, whose own parents were Elias Kassar and Mary Dahria. Rowan’s great-grandmother Mary was an ethnic Armenian, from Bilecik, Turkey, and was the daughter of Anna.

Rowan’s paternal grandmother is Barbara Boyce (the daughter of Louis/Lewis E. Boyce/Boice and Eleanor Blanchard). Barbara was born in New York. Louis was the son of Edward Boyce/Boice and Charlotte S. Aston, who was of recent English immigrant background. Eleanor was the daughter of Agnew Crosby Blanchard and Anna Helen Bryde. Rowan’s great-great-grandmother Anna was the daughter of Frederick/Fredrick J. Bryde, who was born in Denmark, of Danish and Norwegian descent, and of Augusta Bryde, who was Swedish.

Rowan’s maternal grandfather was Richard Harry Folk (the son of Harry Robert Folk and Evangeline/Virginia Garcia). Richard was born in Hawaii. Harry was born in Pennsylvania, and was of German ancestry; he was the son of Frank Richard Folk and Cara/Cora Kummerer. Evangeline was born in Hawaii, the daughter of Manuel R. Garcia and Maria Souza. While the “race” of Evangelina and her parents is listed as “Puerto Rican” on the 1920, the birthplace of her parents is listed as Portugal. The maiden name of Maria, Souza, is consistent with a Portuguese background (Maria’s parents were Henrick Souza and Ramona).

Genealogy of Rowan Blanchard (focusing on her mother’s side) – http://www.myheritage.com