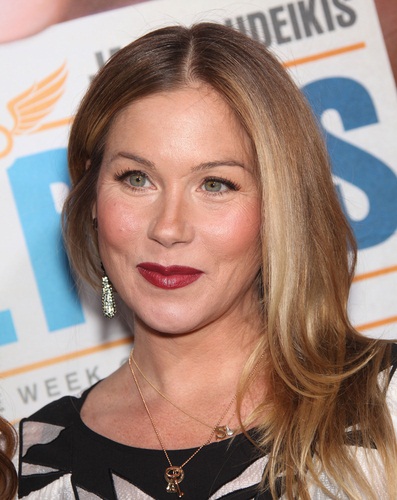 Christina Applegate is an American actress and dancer. Her roles include television’s Married… with Children, Up All Night, Friends, Samantha Who?, and Dead to Me, and the films Anchorman and its sequel, Don’t Tell Mom the Babysitter’s Dead, Jane Austen’s Mafia!, The Sweetest Thing, Bad Moms, Hall Pass, and Vacation (2015).

She is the daughter of Robert Applegate (Robert William Applegate), a record producer and executive, and Nancy Priddy (Nancy Lee Priddy), an actress and musician. She is married to musician Martyn LeNoble, with whom she has a daughter.

Most of her family has lived in the United States for many generations. Her ancestors were English, Scottish, German, Irish, Scots-Irish/Northern Irish, Welsh, more distant Dutch, French, Danish, Swedish, 1/512 Portuguese, and remote Norwegian. Her Portuguese roots come from her Driggs line, spelled Rodrigues many generations back.

Christina’s maternal grandfather was Carl Clarence Priddy (the son of Sylvester N./M. Priddy and Harriet Arena/I. Clevenger). Carl was born in Indiana. Sylvester was the son of John H. Priddy and Mary Ann Himes. Harriet was the daughter of Elisha Clevenger and Rebecca Eleanor/Ellen Tuttle.

Christina’s maternal grandmother was Katherina/Katherine/Catherine Iona Driggs (the daughter of Herbert Charles/Cole Driggs and Minnie Handlong). Katherina was born in Indiana. Herbert was the son of Hiram C. Driggs and Louisa Woodruff May. Minnie was the daughter of Joseph Handlong and Alice Ripple.