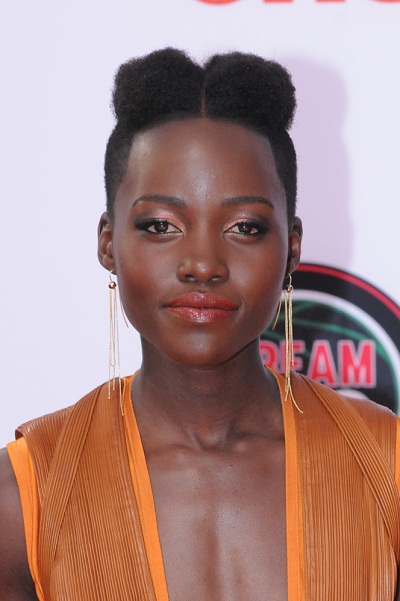 Lupita Nyong’o is an actress, author, and director. She won the Academy Award for Best Supporting Actress for 12 Years a Slave (2013). She is also known for her roles in the films Us, Queen of Katwe, Black Panther, Little Monsters, and Non-Stop.

She was born in Mexico City, Mexico, to Kenyan parents, Dorothy Ogada Buyu Nyong’o and Peter Anyang’ Nyong’o, a college professor and politician, who has been Governor of Kisumu County, since 2017, and had previously served as a Member of the Kenyan Parliament, from 2003 to 2013, and a Minister of Medical Services in the Kenyan government, from 2008 to 2013.

Lupita is of Luo descent. She is fluent in Spanish, Luo, English, and Swahili.

Her parents were living Mexico at the time of her birth because her father was a political enemy of Daniel arap Moi, who was President of Kenya from 1978 to 2002. Her father’s brother, Charles, died in a fall from a boat, possibly as a politically-motivated murder to intimidate Lupita’s family. Lupita’s father was working as a visiting lecturer at a Mexican university when she was born.

It is a Luo tradition to name a child after the day’s events, and so, because of the family’s Mexican residence and her Mexican birth, she was named Lupita as a tribute to Guadalupe, Our Lady of Guadalupe.

Lupita’s parents moved back to Kenya in the mid 1980s, though Lupita spent some more time in Mexico, in Taxco, Guerrero, during her teen years. Her father was imprisoned and tortured by the Kenyan government in 1987.

One of Lupita’s great-great-grandfathers was named Nyawang’ Ogwal.