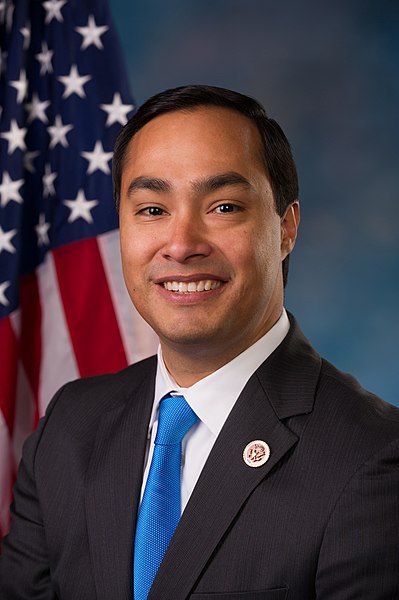 Joaquín Castro is an American politician. A member of the Democratic Party, he has served as a Member of the U.S. House of Representatives from Texas, since January 3, 2013.

Joaquín is the son of Maria Del Rosario “Rosie” Castro and Jessie Guzman. His parents are both political activists. His mother helped establish the Chicano (Mexican-American) political party La Raza Unida. His identical twin brother is politician Julián Castro. Joaquín is married to Anna Flores, with whom he has two children.

Joaquín’s maternal grandmother was Victoria Manuela Castro Alvarado (the daughter of Victoriano Castro Gallardo and María Anastacia Alvarado Cortés). Victoria was born in San Pedro, Coahuila, Mexico, and moved to the U.S. around 1920. Victoriano was the son of Manuel Castro Carrillo and María de Jesús Gallardo Sumarán. Anastacia was the daughter of Higinio Alvarado López and Trinidad Cortés Juárez/Villanueva/Villarreal.

Joaquín’s matrilineal line can be traced back to his third great-grandmother, María Sebastiana Juárez/Villanueva/Villarreal.

Genealogy of Joaquín Castro (focusing on his mother’s side) – https://www.geni.com