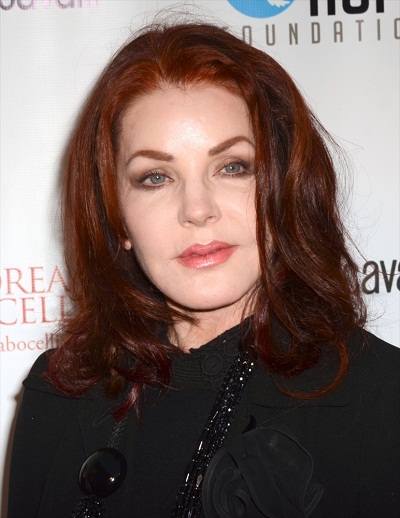 Presley in 2013, photo by Prphotos.com

Priscilla Presley is an American actress and business magnate. She is known for starring in The Naked Gun films, and on television’s Dallas and Tales from the Crypt.

She is the daughter of Anna Lillian and James Frederick Wagner, a U.S. Navy pilot. Her father died in a plane crash when she was six months old. Her mother re-married to U.S. Air Force officer Paul Beaulieu.

Priscilla is a half-aunt of actor, producer, and podcast host Kash Hovey. Her maternal half-sister is his mother.

Priscilla’s paternal grandmother was Kathryn Gates Ramsey (the daughter of James Calvin Ramsey and Alice Jane Baughman). Kathryn was born in West Virginia. James was the son of Daniel W. Ramsey and Harriett Hollibaugh. Alice was the daughter of John Peter Baughman and Martha Jane Shirk.

Priscilla’s maternal grandfather was Albert Henry Iversen (the son of Hjalmar Armand/Amund Iversen and Anna Teoline/Theoline Johansen/Johannesen). Albert was born in Egersund, Rogaland, Norway. Amund was the son of Amund Iversen and Jakobine Davidsen. Anna was the daughter of Johannes/Jon Ellingsen and Ingeborg Theodora Torgersdatter.

Priscilla’s maternal grandmother was Lorraine Grace Davis (the daughter of Samuel David Davis and Effie Lillian Valentine). Lorraine was born in New London, New London Co., Connecticut. Samuel was the son of John Davis and Louisa Jackson. Effie was the daughter of Luther Topliff Valentine, whose father was English, and of Cynthia Elizabeth Tucker.

Genealogy of Priscilla Presley (focusing on her father’s side) – http://www.wikitree.com