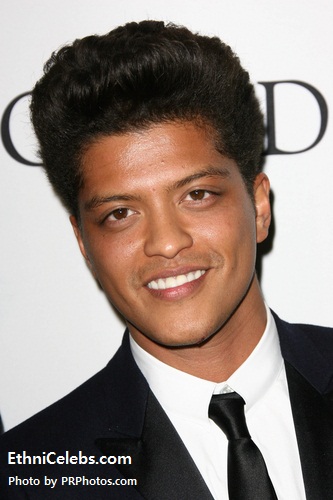 Bruno Mars is an American singer, songwriter, multi-instrumentalist, record producer, dancer, actor, and choreographer. He is one half of the R&B super-duo Silk Sonic, with Anderson .Paak.

Bruno is the son of Bernadette del Pedro Bayot and Peter S. Hernandez, both of whom were musically-inclined, his father performing rock and roll and his mother a singer and a dancer. He was raised in Honolulu’s Waikiki neighborhood. Growing up, he was exposed to rock, reggae, hip hop, and R&B.

His father is from Brooklyn, New York. Bruno’s paternal grandfather was Puerto Rican and Bruno’s paternal grandmother was Ashkenazi Jewish, of Hungarian Jewish and Ukrainian Jewish descent. Bruno’s mother was from Manila, Phillippines, and was of Filipino [including Cebuano and Tagalog], and some Spanish [Castilian], ancestry. Through his Puerto Rican line, he has at least 1/256th Italian ancestry.

He was nicknamed Bruno due to his resemblance to professional wrestler Bruno Sammartino.

Bruno’s paternal grandmother was Mildred Dubov (the daughter of William Wolf Dubovis/Dubov and Bella Berger). William was a Jewish emigrant, from Kiev, and was the son of Sholom Yoseph DuBovis and Malka Weissman. Bella was born in New York City, to Hungarian Jewish parents, Joseph Berger and Louise Wohlberg.

Bruno’s maternal grandfather was Romeo Amando Maria “Eugene” Herranz Bayot (the son of Jesús María Bayot Fuentes and Consolación “Consuelo” Herranz Cañizares). Romeo was born in Manila, Philippines. Jesús was also born in Manila, the son of Gabriel Bayot and Josefa Fuentes. Consolación was born in Segovia, Spain. Consolación’s father, Mariano Herranz Heras, was Spanish, from Nava de la Asunción, Segovia, and Consolación’s mother, Mamerta Cañizares Secuya (or Mamerta Secuya Cañizares in Filipino), was born in Talisay, Cebu, Phillippines, the daughter of Alejo Cañizares Canindot (or Alejo Canindot Cañizares in Filipino), also of Talisay, and of Sabina Secuya Larombe (or Sabina Larombe Secuya in Filipino), of Minglanilla, Cebu. The surname Secuya is also spelled as Sycuya, which is of possibly Chinese origin, but it is not clear if Sabina had Chinese ancestry. 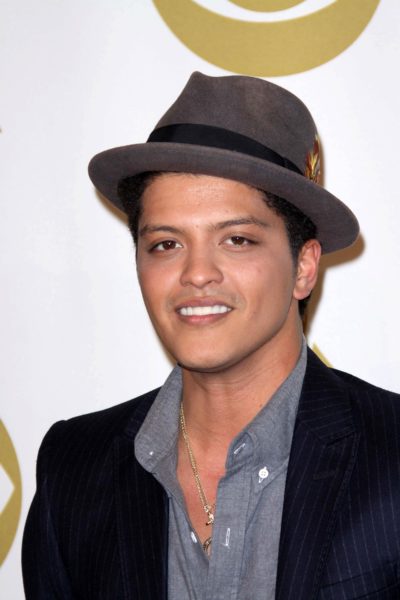 Genealogy of Bruno Mars (focusing on his mother’s side) – http://familytreemaker.genealogy.com