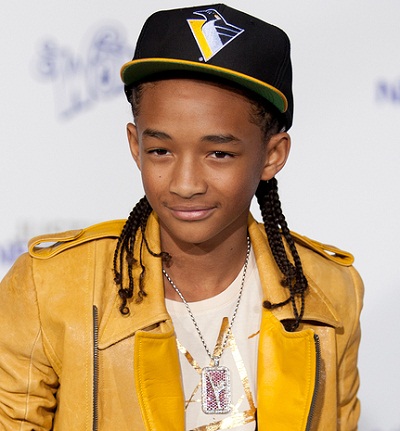 Smith in 2011, photo by Photo Works/Bigstock.com

Jaden Smith is an American actor, rapper, singer, songwriter, and model. He is the son of actors and musicians Will Smith and Jada Pinkett Smith, the brother of actress and singer Willow Smith, and the half-brother of actor and disc jockey Trey Smith. His maternal grandmother’s family were of African-/Creole-Caribbean descent, while his other grandparents are African-American. His uncle is actor and writer Caleeb Pinkett.

Jaden made his starring film debut in the 2006 drama The Pursuit of Happyness, playing the son of his real-life father’s character. He has also had a supporting role in the remake The Day the Earth Stood Still (2008, starring Keanu Reeves), and played the lead in the remake of the hit The Karate Kid, starring opposite Jackie Chan, in 2010.

Jaden’s paternal grandfather was Willard Carroll Smith, Sr. (the son of George Wilmer/Willard Emmett Smith and Ellen King). Jaden’s grandfather Willard was African-American. George was the son of William Smith and Orlinda Dickens. Ellen was the daughter of Claude King and Alice L.

Jaden’s paternal grandmother is named Caroline Bright (the daughter of a father surnamed Bright, and of Helen). Caroline is African-American.

Jaden’s maternal grandmother is Adrienne Banfield (the daughter of Gilbert Leslie Banfield and Marion Eliza Martin). Adrienne’s family were Black/Creole immigrants from the West Indies (Barbados and Jamaica). Gilbert was the son of Gilbert Banfield and Ella E. R. Parris/Paris. Marion was the daughter of Ralph Nunis Martin and Daisy Maude Costa/Coster.