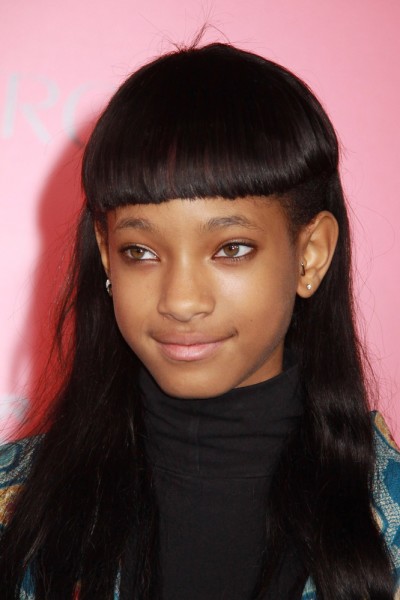 Willow Smith is an American singer, actress, and dancer. She is the daughter of actors/musicians Will Smith and Jada Pinkett Smith, the sister of actor and musician Jaden Smith, and the half-sister of actor and disc jockey Trey Smith. Her maternal grandmother’s family were of African-/Creole-Caribbean descent, while her other grandparents are African-American. Her uncle is actor/writer Caleeb Pinkett.

Willow made her acting debut in 2007 in the film I Am Legend, with her father, and later appeared in Kit Kittredge: An American Girl, alongside Abigail Breslin. Willow launched her music career in autumn 2010, with the release of the hit singles “Whip My Hair” and “21st Century Girl,” and signed to her current mentor Jay-Z‘s record label Roc Nation, becoming the youngest artist signed to the label.

Willow’s paternal grandfather was Willard Carroll Smith, Sr. (the son of George Wilmer/Willard Emmett Smith and Ellen King). Willow’s grandfather Willard was African-American. George was the son of William Smith and Orlinda Dickens. Ellen was the daughter of Claude King and Alice L.

Willow’s paternal grandmother is named Caroline Bright (the daughter of a father surnamed Bright, and of Helen). Caroline is African-American.

Willow’s maternal grandmother is Adrienne Banfield (the daughter of Gilbert Leslie Banfield and Marion Eliza Martin). Adrienne’s family were Black/Creole immigrants from the West Indies (Barbados and Jamaica). Gilbert was the son of Gilbert Banfield and Ella E. R. Parris/Paris. Marion was the daughter of Ralph Nunis Martin and Daisy Maude Costa/Coster.