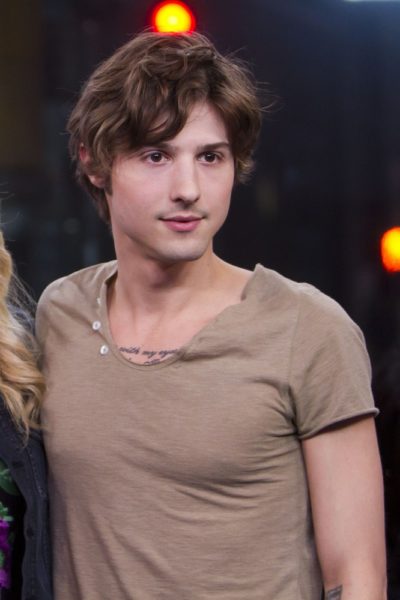 Follese in 2012, Photo by prphotos.com

Ryan Follese is an American singer, songwriter, and musician. He is the lead singer, rhythm guitarist, and bass guitarist of the pop band Hot Chelle Rae. Other members of the band are his brother, Jamie Follese, as well as Nash Overstreet, and previously Ian Keaggy.

Ryan is the son of Adrienne, a singer, and Keith Follese, a country songwriter. Ryan’s father is of one quarter Norwegian descent, with his other roots being Danish, Irish, English, German, and remote Dutch. Ryan’s maternal grandfather was Ashkenazi Jewish, of Czech Jewish, German Jewish, English Jewish, Dutch Jewish, and Polish Jewish ancestry. Ryan’s maternal grandmother, who was from a Mormon family, was of one quarter Danish, as well as English, Scottish, and Scots-Irish/Northern Irish, ancestry.

Ryan’s paternal grandmother was Dorothy Dawn Richmond (the daughter of Carl Amondus/Amundus Richmond and Caroline/Carol Hazel Moose). Dorothy was born in Minnesota. Ryan’s great-grandfather Carl was born in Denmark, the son of George Johansen Richsmann, who had German and Danish ancestry, and of Elsa/Elsie Marie Pedersen, who was of Danish descent. Ryan’s great-grandmother Caroline was the daughter of George Wiley Moose and Sue Evangeline Corson, and had English, German, and Dutch ancestry.

Ryan’s maternal grandfather was Maurice Anger (the son of Maurice Anger, born Mořic Stanislav Anger, and of Henrietta “Etta” Sussman/Susmann). Ryan’s grandfather Maurice was born in Alameda, California. He was Jewish, and was a band leader and musician. Ryan’s great-grandfather Maurice was a Czech conductor and composer, and was born in Susice, Bohemia, Czechoslovakia. Henrietta was the daughter of Philip Sussman, who was born in Altona, Hamburg, Germany, and of Rebecca Keesing, who was born in San Francisco, to English Jewish parents, and who was also of Dutch Jewish, and more distant German Jewish and Polish Jewish, descent.

Ryan’s maternal grandmother was Jerrie Louise Madsen (the daughter of Shirley Brigham Madsen and Nellie Louise Silvers). Jerrie was a jazz singer, who was born in Salt Lake City, Utah, to a Mormon family. Shirley was the son of Brigham Madsen, whose parents were Danish, and of Matilda Chesley, whose ancestry was English, Scots-Irish/Northern Irish, and Scottish on one side, and Scottish on the other. Ryan’s great-grandmother Nellie was born in Liverpool, England, the daughter of John James Silver and Eleanor Laura Shapley.

Sources: Genealogy of Ryan’s paternal grandfather, Sigurd Everett Follese (through Sigurd’s sister) (focusing on his own father’s side) – http://www.thekleistpage.com

Genealogy of Ryan’s father (focusing on his own mother’s side) – http://www.genealogy.com

Genealogy of Ryan’s mother (focusing on her father’s side) – https://www.geni.com