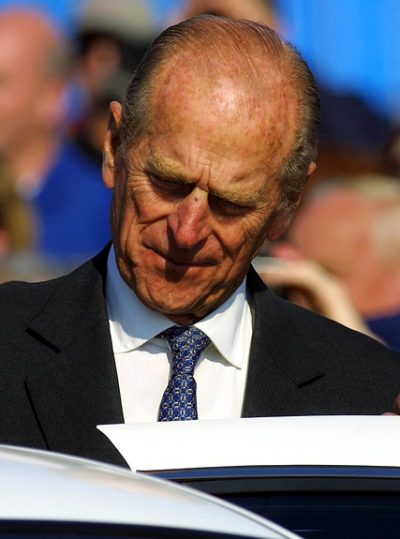 Prince Philip, Duke of Edinburgh, in 2002, photo by Jamie Roach/Bigstock.com

Prince Philip was born on Mon Repos in Corfu, an island in the Kingdom of Greece, to the country’s royal family. His father, Prince Andrew of Greece and Denmark, was born in Athens, Kingdom of Greece, of House of Schleswig-Holstein-Sonderburg-Glücksburg. His mother, Princess Alice of Battenberg (Victoria Alice Elizabeth Julia Marie), was born in Windsor Castle, Berkshire, England. She founded an order of Greek Orthodox nuns, the Christian Sisterhood of Martha and Mary; and saved Jews during the Holocaust, for which she was recognized as Righteous Among the Nations. At her request, she was buried at the Russian Orthodox, Church of Mary Magdalene, in Gethsemane, Jerusalem.

Prince Philip’s closest genealogical relation to his wife Elizabeth II was through Christian IX of Denmark and Princess Louise of Hesse-Kassel, who were his great-grandparents and her great-great-grandparents, making Philip and Elizabeth second cousins, once removed. Through Prince Albert and Queen Victoria, they were third cousins.

Though he was born in Greece and was often referred to as Greek, he had no ethnic Greek ancestry (he also had no ethnic English ancestry). A plebiscite in Greece in 1862 decided that Windsor Castle-born, Prince Alfred of the United Kingdom, later Duke of Edinburgh, would become King of Greece, though he could not accept. Eventually, the choice was made as Danish-born, George I of Greece, Prince Philip’s paternal grandfather, who established the family’s royal line in Greece. He adopted the Greek Orthodox faith into which Prince Philip was born. Prince Philip later became Anglican.

Prince Philip’s paternal grandfather was George I of Greece (born Prince William of Schleswig-Holstein-Sonderburg-Glücksburg, the son of Christian IX of Denmark, and of Princess Louise of Hesse-Kassel). Prince Philip’s grandfather George I was born in Copenhagen, Denmark, and was King of the Hellenes, from 30 March, 1863 to 18 March, 1913. Prince Philip’s great-grandfather Christian IX was born in Gottorf Castle, Schleswig, Duchy of Schleswig, and was King of Denmark, from 15 November, 1863 to 29 January, 1906. He was the son of Friedrich Wilhelm, Duke of Schleswig-Holstein-Sonderburg-Glücksburg, and of Princess Louise Caroline of Hesse-Kassel. Prince Philip’s great-grandmother Princess Louise was born in Kassel, Electorate of Hesse, German Confederation, and was the daughter of Prince William of Hesse-Kassel, and of Princess Charlotte of Denmark, who had been born in Christiansborg Palace, Copenhagen.

Prince Philip’s paternal grandmother was Grand Duchess Olga Constantinovna of Russia (the daughter of Grand Duke Konstantin/Constantine Nikolayevich/Nikolaevich/Nicholaievitch of Russia, and of Princess Alexandra of Saxe-Altenburg). Prince Philip’s grandmother Grand Duchess Olga was born in Pavlovsk, Russian Empire, and was Queen consort of the Hellenes, from 27 October, 1867 to 18 March, 1913, and Regent of Greece, from 17 November, 1920 to 19 December, 1920. Prince Philip’s great-grandfather Grand Duke Konstantin was born in the Winter Palace, St. Petersburg, Russian Empire, and was the son of Nicholas I of Russia, who was Emperor of Russia, from 1 December, 1825 to 2 March, 1855, and of Alexandra Feodorovna, Charlotte of Prussia, who had been born in Charlottenburg Palace, Berlin, Kingdom of Prussia, Holy Roman Empire. Prince Philip’s great-grandmother Princess Alexandra was born in Altenburg, Duchy of Saxe-Altenburg, and was the daughter of Joseph, Duke of Saxe-Altenburg, and of Duchess Amelia of Württemberg.