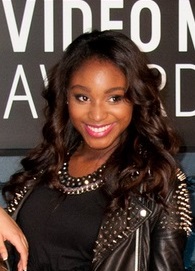 Normani in 2013, photo by Prphotos.com

Normani, also credited as Normani Kordei, is an American musician, singer, and dancer. She is a member of singing group Fifth Harmony, along with Ally Brooke, Dinah Jane, Lauren Jauregui, and, previously, Camila Cabello.

Normani was born Normani Kordei Hamilton, and is the daughter of Derrick and Andrea Hamilton. She stated in an interview that she is of African-American, French, and Indian descent. It is not clear if she was referring to ancestry that is Native American, or Indian from India.

Normani spent her early years in New Orleans. Her family moved to Pearland, Texas after Hurricane Katrina, in 2005. Normani has two older half-sisters, Arielle and Ashlee. She has been performing since she was three, and was an award-winning dancer and gymnast before recording her first single at age thireen. She also had a role on the HBO series Treme.

Normani’s grandmother was Barbara Bissant (the daughter of Robert Normand “Bob” Bissant, Sr. and Annabel Hymes). Robert was the son of Champion Bissant and Luda Miller. He played baseball in the Negro League. Annabel was the daughter of Mitchell Hymes and Ida Villavaso.