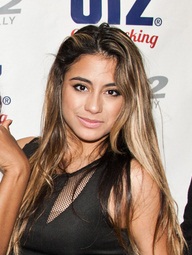 Brooke in 2014, photo by Prphotos.com

Ally Brooke is an American singer. She is a member of singing group Fifth Harmony, along with Dinah Jane, Lauren Jauregui, Normani, and, previously, Camila Cabello.

Ally is the daughter of Patricia and Jerry Hernandez. Ally cites Selena as her biggest musical influence.