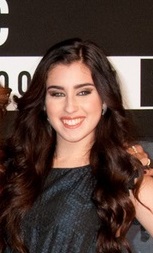 Jauregui in 2013, photo by Prphotos.com

Lauren Jauregui is an American singer and musician. She is a member of singing group Fifth Harmony, along with Ally Brooke, Dinah Jane, Normani, and, previously, Camila Cabello.

Lauren’s parents, Clara Martha Morgado Aguiar and Michael Jauregui, are Cuban. Her surname is Basque. Lauren has two younger siblings, a brother, Chris, and a sister, Taylor. She has cited Journey, Paramore, Alicia Keys, and Christina Aguilera as influences.

I’ve had to deal with not being white enough for white people and not being Latin enough for Latin people… I’m very fair-skinned with light eyes. At first glance, almost everyone assumes I am purely white… [I’ve had to deal with people] telling me what my roots are or what I am allowed to claim about myself and my own history… All of us came to this country from somewhere else and I can trace my lineage back to Cuba and Spain. All I know is that I was born and raised in Miami, Florida, to a Cuban family. I spoke Spanish before I went to school [as a child]. [I] speak it with all of my family members in my household… All artists of Latino descent [can] have a social and cultural impact [on society]… [When] people see themselves represented, [it allows] them to truly follow their dreams despite the obstacles that routinely get in the way.