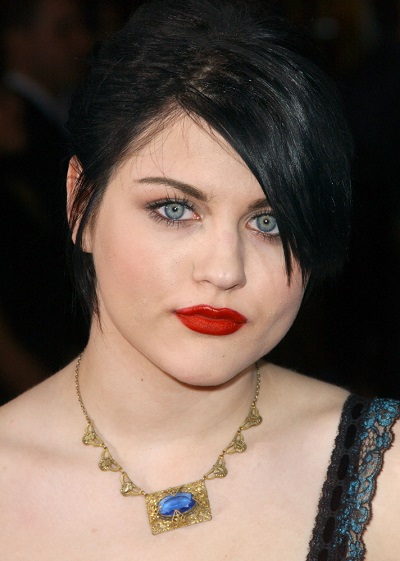 Cobain in 2008, photo by Prphotos.com

Frances Bean Cobain is an American visual artist. She is the only child of Nirvana frontman, the late Kurt Cobain, and Hole frontwoman Courtney Love. Cobain was born at 7:48 a.m. on August 18, 1992 at Cedars-Sinai Medical Center in Los Angeles, California. She was named after Frances McKee, the guitarist for the Scottish indie pop duo The Vaselines. Her middle name Bean was chosen because Kurt Cobain thought she looked like a kidney bean on the ultrasound. Her godfather is former R.E.M. frontman Michael Stipe, and the actress Drew Barrymore is her godmother.

Frances’s paternal grandfather is Donald Leland Cobain (the son of Leland Elmer Cobain and Iris Maxine Labrot/LaBrot). Donald was born in Washington. Leland was the son of John James Arthur Cobain, whose father was born in Tyrone, Northern Ireland, and of Grace Almeda Gibson. Iris was the daughter of Clairmont Neil Labrot/LaBrot, who had French/French-Canadian and Irish ancestry, and of Florence Jeanette Tuck, whose father was Canadian.

Frances’s paternal grandmother is Wendy Elizabeth Fradenberg (the daughter of Charles Thomas Fradenburg and Margaret Dawson Irving). Charles was the son of Charles Lester Fradenburg and Elizabeth Mary Ultican, whose own father was born in New Brunswick, Canada, of Irish descent, and whose own mother was also of Irish origin. Margaret was the daughter of James William Irving, who was Scottish, and of Ada Elizabeth Dawson, who was born in Kent, England.

Frances’s maternal grandmother is named Linda Risi. Linda was adopted by the Risi family, who were Italian-American. Linda’s biological mother was Paula Fox. Paula, an author, was the daughter of Paul Hervey Fox, who had English ancestry, and of Elsie de Sola de Carvajal, who was born in Mantanzas, Cuba. Elsie’s father was Fermín de Sola e Iradi, whose own father was from Mondragón, Gipuzkoa, Spain, and whose own mother was born in Curaçao, to a Basque father, from San Sebastián, Gipuzkoa, and to a mother from Saint Thomas, U.S. Virgin Islands. Elsie’s mother, Frances’s great-great-great-grandmother, was Candelaria Martínez de Carvajal y del Camino, whose parents were Spanish, her father from Almería, Almería, and her mother from Gijón, Asturias, respectively.

Genealogy of Frances Bean Cobain (focusing on her father’s side) – http://www.wikitree.com

Genealogy of Frances’s father (focusing on his father’s side) – http://wc.rootsweb.ancestry.com

Genealogy of Frances’s paternal great-great-grandmother, Grace Almeda Gibson (focusing on her own mother’s side) – http://www.ancestry.co.uk

Genealogy of Frances’s mother (focusing on her own mother’s side) – http://worldconnect.rootsweb.ancestry.com