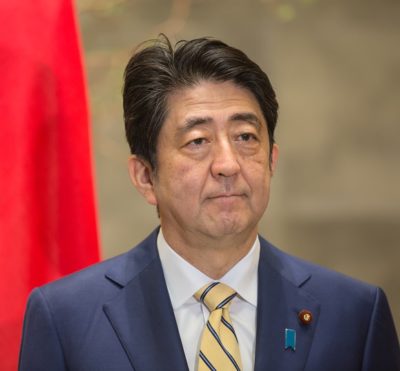 Abe in 2016, photo by palinchak/Bigstock.com

He was Japan’s longest-serving Prime Minister.

Prime Minister Abe was the son of Yoko (Kishi) and politician Shintaro Abe, who was Chief Cabinet Secretary, from 28 November, 1977 to 7 December, 1978, and Minister of Foreign Affairs, from 27 November, 1982 to 22 July, 1986, among other duties. He was married to radio disc jockey Akie Abe (born Akie Matsuzaki), until his death. His maternal grandfather, Nobusuke Kishi, was Prime Minister of Japan, from 31 January, 1957 to 19 July, 1960, and also Director-General of the Japan Defense Agency, from 31 January, 1957 to 2 February, 1957. Kishi was de facto “economic king” of Japanese-occupied China, Korea, and Manchukuo, a Japanese puppet-state in Northern China.