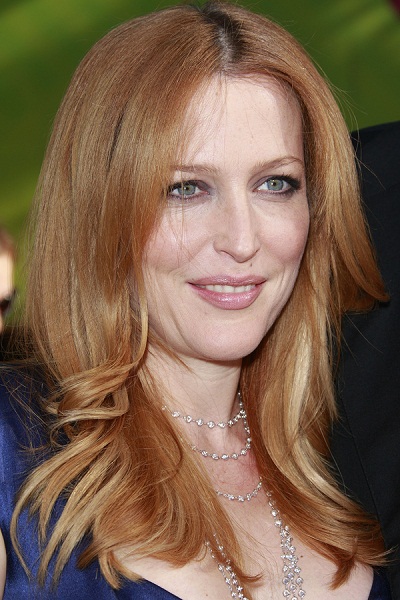 Anderson in 2008, image via Joe Seer/Bigstock.com

Gillian Anderson is an American actress, activist, and writer. She is known for her role as Scully on The X-Files, as well as for starring in many British productions, including Bleak House, The Crown, and The Spy Who Dumped Me.

Gillian was born in Chicago, Illinois, the daughter of Rosemary Alyce “Posie” (Lane) and Homer Edward “Ed” Anderson III. She spent her early years growing up in England, before moving back to the U.S., Grand Rapids, Michigan, in her early teens; she also lived in Puerto Rico. During her adult life, she has lived and worked extensively in the U.K., living in London since the early 2000s.

Gillian has a daughter with her former husband, art director and production designer Clyde Klotz; and two children with her former partner, businessperson Mark Griffiths.

Gillian’s maternal grandmother was Louise Theresa Bachhuber (the daughter of Philip/Phillip George Bachhuber, Sr. and Rosa/Rose Johanna Bauer). Louise was born in Wisconsin, and was of German descent. Philip was the son of Andreas “Andrew” Bachhuber and Louisa “Lizzy” Sterr. Rosa was the daughter of Joseph Bauer and Elizabeth Mary Hinkes.

Genealogy of Gillian Anderson (focusing on her mother’s side) – http://familytreemaker.genealogy.com

Genealogy of Gillian’s mother (focusing on her own father’s side) – https://www.geni.com