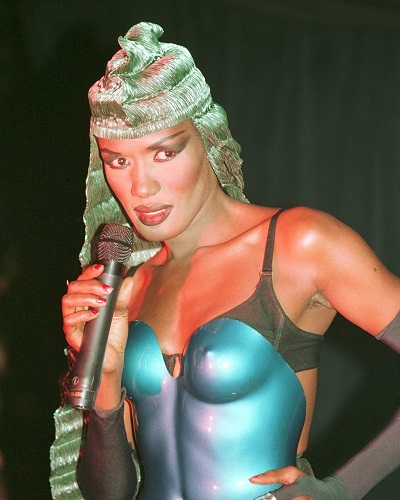 Grace Jones is a Jamaican supermodel, singer, songwriter, record producer, and actress. She has also been credited as Grace Mendoza.

Grace is the daughter of Marjorie Nell (Williams) and Robert Winston Jones. She is married to Atila Altaunbay. She has a son with her former partner, French graphic designer and illustrator Jean-Paul Goude.

Grace’s maternal grandfather was John Vincent Williams (the son of Nathaniel/Nathanael Augustus Williams and Evelyn/Evaline Epseba Solan). John was born in Spanish Town, Saint Catherine, Jamaica. Nathaniel was the son of Thomas B. Williams. Evelyn was the daughter of Daniel Solon.

Grace’s maternal grandmother was Lily Bell Beatrice Walters (the daughter of Nathaniel Walters and Caroline Beatrice Powell). Nathaniel was the son of Charles Walters. Caroline was said to be the daughter of a white father of Scottish descent, George Powell, and of a black mother.