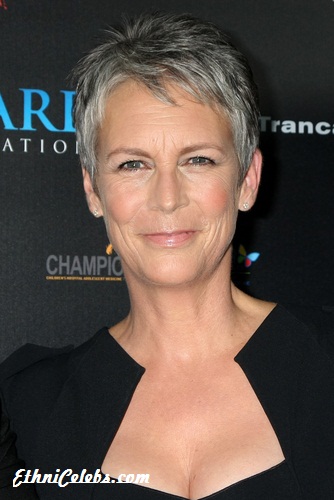 Jamie Lee Curtis is an American actress and author. Known as a Scream Queen, she has starred in the Halloween films, as well as The Fog, Terror Train, A Fish Called Wanda, True Lies, Knives Out, and Freaky Friday, among many other roles.

Jamie Lee is the daughter of actors Tony Curtis (born Bernard Schwartz) and Janet Leigh (born Janett Helen Morrison). Her stepfather was Robert Brandt. She is the sister of actress Kelly Curtis and the half-sister of actress and businessperson Allegra Curtis. Jamie Lee is married to actor, director, and author Christopher Guest, with whom she has two children, who are adopted. Through her marriage to Christopher, a Baron in the British peerage, she is known as Jamie Lee Haden-Guest, Baroness Haden-Guest, or as The Lady Haden-Guest of Saling in the County of Essex.

Jamie Lee’s paternal grandfather was Emanuel “Manuel” Schwartz (the son of Victor Schwartz and Rose/Rosa Taub). Emanuel was a Jewish emigrant, from Ópályi, now in Mátészalka, eastern Hungary. Victor was the son of Samuel Schwartz and Barbra/Borbala/Barbara Engel.

Jamie Lee’s paternal grandmother was Helen Klein (the daughter of Izidor Klein and Matilda Grűnwald). Helen was a Jewish emigrant, from Vaľkovo, in central Slovakia.

Jamie Lee’s maternal grandfather was Frederick/Fred Robert Morrison (the son of John Beauregard Morrison and Katharine/Katherina/Katherine Francis/Frances Reeb). Frederick was born in California. John was the son of McHenry/Henry Morrison and Susan Ellen/Eliza Tichenor/Titchenal, and had English, Scots-Irish/Northern Irish, and remote French, ancestry. Katharine was the daughter of George Reeb/Rube, who was born in Zutzendorf Bas-Rhin, France, to an ethnic German family, and of Rosina Hunziker, who was from Switzerland, and was of Swiss-German descent.

Jamie Lee’s maternal grandmother was Helen Lita Westergaard (the daughter of Wilhelm/William Marius/Marios Anders Westergaard and Lita Olga Gordia Magelia Kofoed/Coffee). Helen was born in California, to Danish parents. Lita was the daughter of Peter Lucius/Lucias Kofoed/Kofod/Coffee, who was born on the Danish island Bornholm, in the Baltic Sea, and of Laura Margrethe/Margarethe Kristine/Christina Larsen.