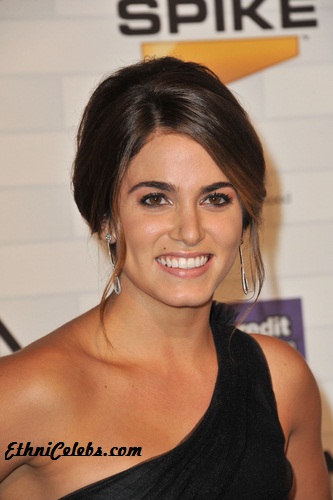 Nikki Reed is an American actress, musician, model, and writer. She starred in and co-wrote the film Thirteen (2003), based on her life, and is also known for her roles in the Twilight saga, Lords of Dogtown, Mini’s First Time, In Your Eyes, and Chain Letter, and the show Sleepy Hollow, among other works.

Nikki is married to actor, model, and director Ian Somerhalder, with whom she has a daughter.

Nikki’s father, Seth Reed, a production designer, is of three quarters Ashkenazi Jewish, from the Austro-Hungarian Empire and Russia, and one quarter German, descent. Nikki’s mother, Cheryl Houston, a beautician, is of one quarter Italian descent, with her other roots being English, Scottish, Scots-Irish/Northern Irish, German, Swiss-German, and distant Welsh and French. While she is not religious, Nikki has described herself as Jewish. Her brother was Bar Mitzvah.

Nikki’s paternal grandfather is John August Reed (the son of Orrel Phillipius/Philip Reed and Frieda/Freida Kristina Biehle). John was born in Ohio. Orrel was born in Ohio, to David Fredrick Reed and Molly/Mollie Sampliner, who were Jewish emigrants from the Austro-Hungarian Empire. Freida was also born in Ohio, the daughter of August Frederick Biehle and Christina Fredricka Mussler, emigrants from Alsace and Germany, who were of non-Jewish background. Freida’s brother, Nikki’s great-great-uncle, was modernist painter August Biehle (August Frederick Biehle, Jr.).

Nikki’s maternal grandmother was Jacqueline Lee Wilcox (the daughter of William Mitchell Wilcox and Merle Mildred Hall). Jacqueline was born in California. William was the son of George William Wilcox and Lessie Gay Foster. Merle was the daughter of Irvine Bertie Hall and Della Margaret Clodfelter.

Sources: Genealogy of Nikki Reed (focusing on her father’s side) – https://www.geni.com

Genealogy of Nikki’s mother (focusing on her own mother’s side) – http://worldconnect.rootsweb.ancestry.com