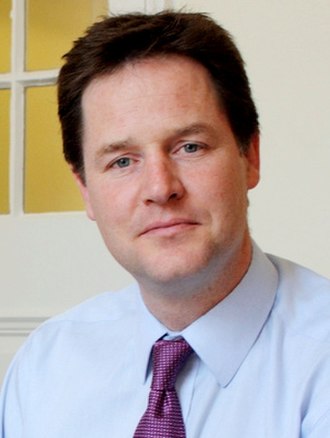 Nick Clegg is a British politician. He served as Leader of the Liberal Democrat party from 2007 to 2015, and, as such, was Deputy Prime Minister of the United Kingdom from 2010 to 2015. He is the son of Nicholas Peter Clegg and Eulalie Hermance van den Wall Bake.

Nick’s paternal grandmother was Baroness Kira von Engelhardt (the daughter of Arthur von Engelhardt, Baron of Smolensk, and of Alexandra “Alla” Ignatievna Zakrevskaya). Arthur was born in Russia, and was of German ancestry. His family lived in Russia for many generations, and became Russian nobility. Alexandra was the daughter of Ignatiy Platonovich Zakrevsky and Maria Nikolayevna Boreisha. Her family was of Ukrainian, Russian, and smaller amounts of Polish, ancestry, and were part of the Count and Noble houses. Her family’s surnames included Zakrevsky, Boreisha, Zaslavsky, Pustovoyt, Razumovsky, Kochubey, Lizogub, Baranov, Demeshko, Apostol, Skoropadsky, Doroshenko, Mazepa, Zelenskiy, and Iskritskiy.

photo By Nick-Clegg [CC BY 2.0], via Wikimedia Commons