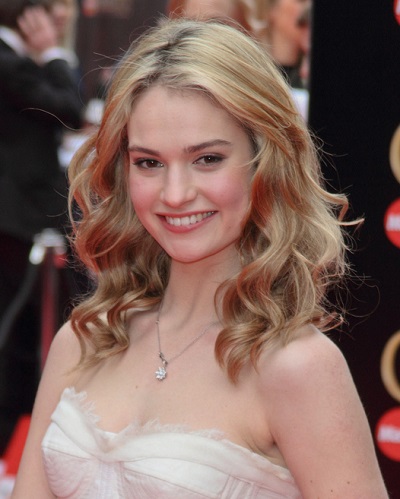 Lily James is an English actress. She is the daughter of Ninette (Mantle) and James S. “Jamie” Thomson, an actor and musician. Her stage surname James is after her father’s first name.

Lily’s paternal grandmother was Helen Horton, an actress (born Helen Virginia Horton, the daughter of Walter Clark “Bud” Horton and Frances Katherine Stewart). Helen was American, born in Chicago, Illinois, of English, Scottish, and German descent. Helen had deep colonial American roots, going back to the 1600s. Walter was the son of Walter Shurts Horton and Alice Cary Jones. Lily’s great-grandmother Frances was the daughter of William W. Stewart and Mary Ellen McArthur, who was born in Collingwood, Ontario, Canada.

Lily’s maternal grandfather was William Eric Mantle (the son of William James Mantle and Laura Edith Carter). Lily’s grandfather William was born in Tiverton, Devon, England, and was a Christian minister. Laura was the daughter of John Carder and Eva Nott.

Lily’s maternal grandmother was named Marinette R. Touzet. Marinette was French. She left her village near Paris at eleven, because of the Nazi invasion.

Genealogy of Lily’s paternal grandmother, Helen Virginia Horton (focusing on her own father’s side) – http://worldconnect.rootsweb.ancestry.com

with some credit to genealogists George Larson and Michael J. Wood