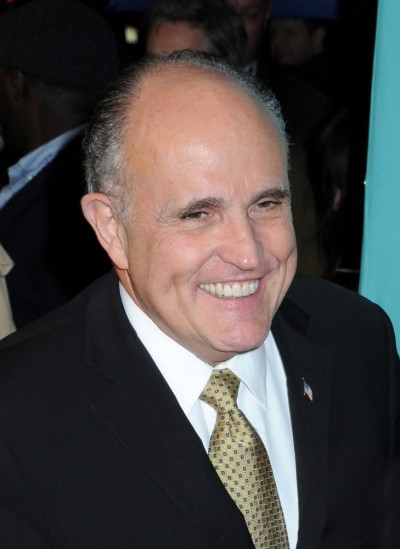 Giuliani in 2009, photo by Prphotos

He was Time Magazine’s Person of the Year for 2001.

Rudy is the son of Helen C. (D’Avanzo) and Harold Angelo Giuliani. His parents were both born in New York. All of Rudy’s grandparents were Italian immigrants.

Rudy’s paternal grandmother was Evangelina/Evangeline Giuliani (the daughter of Domenico Giuliani and Maria Baldecchi). Evangelina was from Marliana.

Rudy is one of several people of significant Italian heritage to have run a plausible or semi-plausible campaign for a major political party’s nomination for President of the United States. Of these candidates, the ones who have won a major party’s caucus, primary, and/or nominating ballot are:
*Al Smith (who was the Democratic Party’s nominee for President of the United States in 1928, and was also a candidate for the 1920, 1924, and 1932 Democratic nominations for President: in 1928, he won 12 contests; in 1932, he won 4 contests; Smith’s paternal grandfather was Italian)
*Michael DiSalle (1960; Democratic; won 1 state, Ohio)
*Rick Santorum (Republican; ran in 2012 and 2016: in 2012, he won 11 contests; Santorum is of three quarters Italian descent)