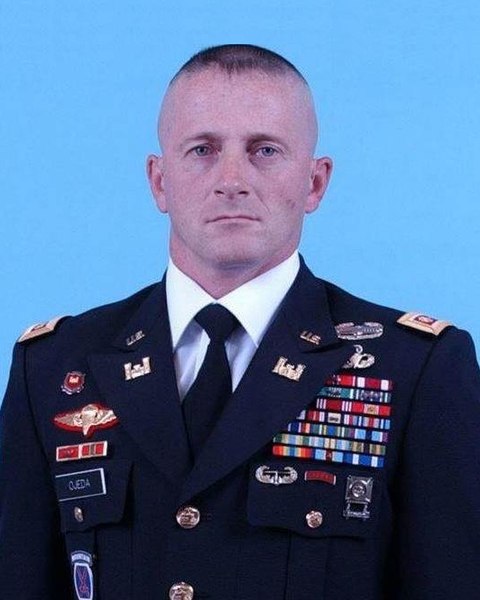 Richard Ojeda is an American politician and U.S. Army officer. A member of the Democratic Party, he served as a Member of the West Virginia Senate, from December 1, 2016 to January 14, 2019.

Richard is the son of Florena (Pansera) and Richard N. Ojeda. He is married to Kelly, with whom he has two children.

Richard’s paternal grandfather was Senon H. “Sam” Ojeda (the son of Martin Ojeda and Christina Hernandez). Senon was a Mexican emigrant from Jalisco, who was undocumented.

Richard’s paternal grandmother was Ocie Lucina Neece (the daughter of Joseph Campbell “Joe” Neece and Rosina Ann/Anne/Rosana Rasnake/Rasnick). Ocie was born in Virginia, and had English and German ancestry. Joseph was the son of James Henry Neece and Sarah A. Taylor. Rosina was the daughter of Elijah Rasnake/Rasnick and Phoebe Lusintha Smith.

Richard is one of several people of Hispanic ancestry to have mounted a major campaign for President of the United States. The others are:
*Ben Fernandez (who sought the 1980, 1984, and 1988 Republican nominations; Fernandez’s parents were Mexican)
*Bill Richardson (who sought the 2008 Democratic nomination; three of Richardson’s grandparents were Hispanic)
*Ted Cruz (2016; Republican; won 11 contests; Cruz’s father is Cuban)
*Marco Rubio (2016; Republican; won 3 contests; Rubio’s parents are Cuban)
*Julián Castro (who sought the 2020 Democratic nomination; Castro is of Mexican descent)

Richard is one of several people of significant Italian heritage to have run a plausible or semi-plausible campaign for a major political party’s nomination for President of the United States. Of these candidates, the ones who have won a major party’s caucus, primary, and/or nominating ballot are:
*Al Smith (who was the Democratic Party’s nominee for President of the United States in 1928, and was also a candidate for the 1920, 1924, and 1932 Democratic nominations for President: in 1928, he won 12 contests; in 1932, he won 4 contests; Smith’s paternal grandfather was Italian)
*Michael DiSalle (1960; Democratic; won 1 state, Ohio)
*Rick Santorum (Republican; ran in 2012 and 2016: in 2012, he won 11 contests; Santorum is of three quarters Italian descent)