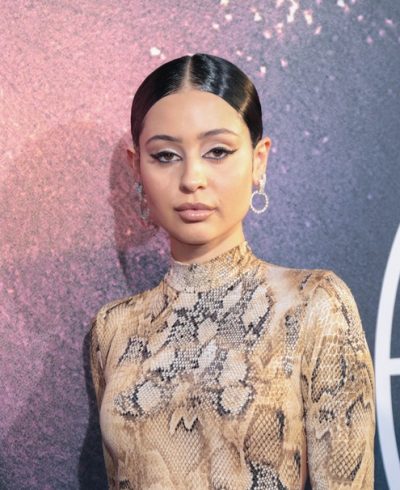 Alexa Demie is an American actress, singer, and model. She plays Maddy Perez on the series Euphoria.

Alexa’s mother, Rose Mendez, is a celebrity make-up artist and writer; she was born in Michoacán, Mexico, and came to the United States in the 1980s.

Alexa’s paternal grandfather was John Robert Vanerstrom (the son of Frank Henry Vanerstrom and Helen R. Rohrback). John was born in Michigan. Frank was the son of Frank August Vanerstrom and Minnie Marie Mincel, who had German ancestry. Helen was the daughter of William James Rohrback/Rohrbach, who was of German descent, and of Margaret Peter/Petee, who was of French-Canadian ancestry. Alexa’s great-great-grandfather Frank Vanerstrom was likely born Frank Childers, and took his stepfather’s name.

Alexa’s paternal grandmother was Carole E. Unrot (the daughter of Abraham “Al” Unrot and Eve/Rebecca Matafsky/Martin). Abraham was born in Canada, the son of Meyer/Max Unrot and Chaya/Annia/Anna Helena Werek, who were Polish Jews/Russian Jews. Eve was born in Glasgow, Scotland, the daughter of Samuel “Sam” Matafsky/Martin and Pauline “Polly” Keller, who were Russian Jews.

Alexa’s grandmother Carole re-married to musician Dennis Wilson, of The Beach Boys, in 1965. Dennis was the brother of musicians Brian Wilson and Carl Wilson. Dennis adopted Alexa’s father. Through this line, Alexa is a first cousin, once removed, of Dennis’s nieces, musicians Carnie Wilson and Wendy Wilson, and a first cousin, twice removed, of Dennis’s cousin, musician Mike Love.

Genealogy of Alexa Demie (focusing on her father’s side) – https://www.geni.com