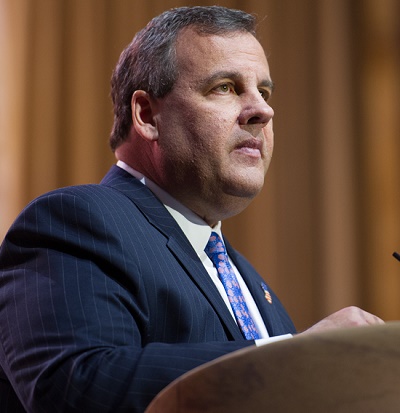 Christie in 2014, photo by Christopher Halloran/Bigstock.com

Chris is the son of Sondra A. (Grasso) and Wilbur James Christie. His father’s ancestry was half German, with the rest being Irish, and some Scottish. His mother was of Italian (Sicilian) descent. Chris is married to investment banker Mary Pat Foster Christie, with whom he has four children.

Chris’s paternal grandfather was James Christopher Christie (the son of Hugh Henry Christie and Bridget Smith). James was born in New Jersey. Hugh was the son of James H. Christie, who was born in Scotland, and of Rosanna Matthews, whose parents were Irish. Bridget was the daughter of Irish parents, John Smith and Bridget.

Chris’s maternal grandfather was named Philip/Phillip Grasso (the son of Santo Grasso and Santa). Philip was of Italian origin.

Chris’s maternal grandmother was named Anna/Anne Scavone (the daughter of Salvatore Scavone and Domenica). Anna was of Italian origin.

Chris is one of several people of significant Italian heritage to have run a plausible or semi-plausible campaign for a major political party’s nomination for President of the United States. Of these candidates, the ones who have won a major party’s caucus, primary, and/or nominating ballot are:
*Al Smith (who was the Democratic Party’s nominee for President of the United States in 1928, and was also a candidate for the 1920, 1924, and 1932 Democratic nominations for President: in 1928, he won 12 contests; in 1932, he won 4 contests; Smith’s paternal grandfather was Italian)
*Michael DiSalle (1960; Democratic; won 1 state, Ohio)
*Rick Santorum (Republican; ran in 2012 and 2016: in 2012, he won 11 contests; Santorum is of three quarters Italian descent)

Genealogy of Chris Christie (focusing on his father’s side) – http://freepages.genealogy.rootsweb.ancestry.com