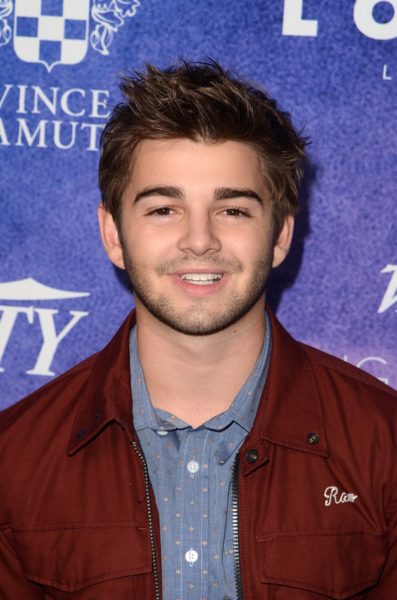 Griffo in 2016, photo by kathclick/www.bigstockphoto.com

Jack Griffo is an American actor. He has starred on the shows The Thundermans and Alexa & Katie, and in the films Jinxed and Splitting Adam.

Jack’s paternal grandfather was Frank Savious Griffo, Jr. (the son of Frank Savious Griffo, Sr. and Martha Strange). Jack’s grandfather Frank was born in Jefferson, Kentucky. Jack’s great-grandfather Frank was born in Tennessee, to a father from Sicily, Italy, Vincent Griffo, and a mother from Kentucky, Mary Repetto, whose own parents, Bartholomew Repetto and Amelia Gatto, were from Genoa, Liguria, Italy. Jack’s great-grandmother Martha was the daughter of James Strange and Martha.

Jack’s maternal grandfather was Thomas Wayne Palatini (the son of Samuel Fox/Fuchsbalg and Mildred Parthania Trueblood). Thomas was born in Norfolk, Virginia. He took on the surname of his step-father, Joseph Oswald Palatini. Jack’s biological great-grandfather Samuel Fox was born in New York, the son of Adolph Fuchsbalg and Amalia Markowitz/Markowics, who were Jewish emigrants from the Austro-Hungarian Empire. Jack’s great-grandmother Mildred was born in North Carolina, the daughter of James Walter Trueblood and Emma Leah Parrish.

Jack’s maternal grandmother was Carol Anne/Ann Sharp (the daughter of Edward Donald Sharp and Marie Louise Levidy). Carol was born in Brooklyn, New York. Edward was the son of Edward Monday Sharp, whose parents, Lafayette Sharp and Amelia Francis Favor, were of Colonial American [English] descent; and of Catherine Little/Stoller, whose own parents were Irish. Jack’s great-grandmother Marie Louise was born in Norfolk, Virginia, the daughter of Greek parents, Spiros S. Levidy, who was from Sparta, and Jennie Arhakos.