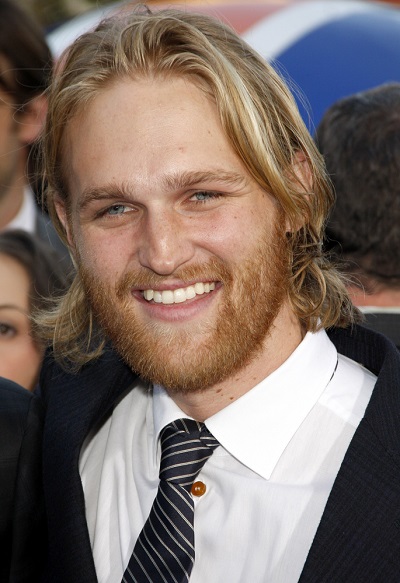 Russell in 2014, photo by Prphotos.com

Wyatt Russell is an American actor and professional ice hockey player. His roles include Lodge 49, We Are What We Are, 22 Jump Street, Cold in July, Everybody Wants Some!!, Ingrid Goes West, Overlord, and The Woman in the Window.

He is the son of actor Kurt Russell and actress, director, singer, and producer Goldie Hawn, and the half-sibling of actors Kate Hudson and Oliver Hudson. Wyatt is married to actress Meredith Hagner, with whom he has a son.

Wyatt’s paternal grandmother was Louise Julia Crone (the daughter of Stanley Martin Crone and Helen Louise Monohan, later Gackenback). Louise was born in Pennsylvania. Stanley was the son of William Henry Crone and Hannah/Anna Marie Freeby, and was of German descent. Helen was the daughter of Neil Monohan, who was of Irish origin, and of Anna Rose Trow.

Wyatt’s maternal grandfather was Edward Rutledge Hawn (the son of Otto Delphia Hawn and Clara/Claire Estelle Johnson). Edward was born in Newport, Jackson, Arkansas. Otto was the son of Aaron Madison Hawn, who was of German descent, and of Nannie Ada Hevrin. Clara was the daughter of Henry Spencer Johnson and Mary Frances Hall.

Genealogy of Wyatt Russell (focusing on his mother’s side) – http://worldconnect.rootsweb.ancestry.com