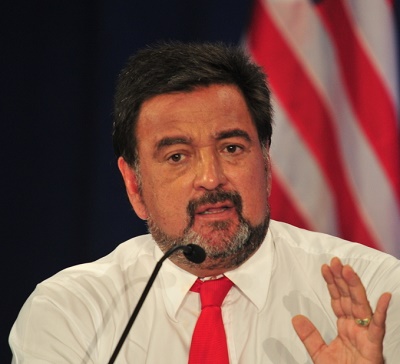 Bill’s father, William Blaine/Blaney Richardson, was born in Chinandega, Nicaragua, to an American father, of Colonial American/English descent, and a Mexican mother; Bill’s father was raised in the United States. Bill’s mother, María Luisa López-Collada Marquez, was born in Márquez, Distrito Federal, Mexico, to a Spanish father and a Mexican mother. Bill is married to Barbara (Flavin) Richardson.

Bill’s paternal grandfather was William Blaney/Blaine Richardson (the son of William Everett Richardson and Vesta Hodsdon). Bill’s grandfather William was born in Boston, Suffolk, Massachusetts, and was of English ancestry, including roots in the United States going back to the 1600s. He was a Mayflower descendant. Bill’s great-grandfather William was the son of Peter R. Richardson and Mehitable Spencer “Hitty” Prentiss. Vesta was born in Berwick, York, Maine, the daughter of David L. Hodsdon and Louisa Tibbitts/Tibbetts.

Bill is one of several people of Hispanic ancestry to have mounted a major campaign for President of the United States. The others are:
*Ben Fernandez (who sought the 1980, 1984, and 1988 Republican nominations; Fernandez’s parents were Mexican)
*Ted Cruz (2016; Republican; won 11 contests; Cruz’s father is Cuban)
*Marco Rubio (2016; Republican; won 3 contests; Rubio’s parents are Cuban)
*Richard Ojeda (who sought the 2020 Democratic nomination; Ojeda’s paternal grandfather was Mexican)
*Julián Castro (who sought the 2020 Democratic nomination; Castro is of Mexican descent)

Genealogy of Bill Richardson (focusing on his father’s side) – https://www.geni.com