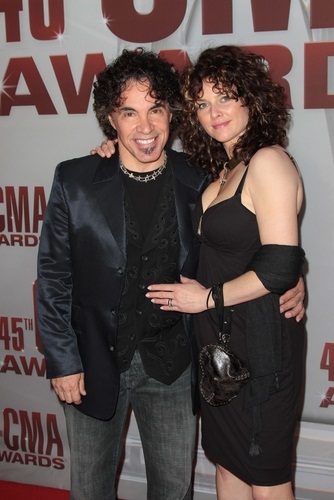 John Oates is an American rock, R&B, and soul guitarist, singer, songwriter, and record producer. He is the guitarist and songwriter of duo Hall & Oates, with principal lead vocalist Daryl Hall.

John’s father, Alfred William “Al” Oates, was from a Gibraltarian family, of English, Spanish [Andalusian, Extremaduran, Valencian], Italian, Portuguese, and possibly Moorish, background. John’s mother was of Italian descent. He is married to Aimee Oates, with whom he has a son.

On page 10 of his autobiography, Change of Seasons: A Memoir, 2017, John writes:

My father’s father was a military policeman… who married a local girl of Spanish and Moorish descent… Around the same time, [John’s maternal grandparents were] a young couple from the Salerno area of Southern Italy.

It is not clear if this Moorish ancestry has been verified/documented. Some people of Spanish background are said, rightly or wrongly, to have “Moorish” ancestry.

John’s paternal grandfather was William Alfred Oates (the son of Alfred Charles Oates and Josefa Martinez). William was born on Gibraltar. Alfred was the son of an English prison warden, William John Oates, of Kent, and of Antonia González, who was of Portuguese descent.

John’s paternal grandmother was Ana Perera (the daughter of José Perera and Isabel Bernarda Bayochi). Anna was born on Gibraltar. José’s father, Manuel Perera, was the son of a Portuguese emigrant, José Pereira (later Perera), of Tavira, Faro, and of Ana Delgado Ruiz, who was Spanish, from Ronda, Málaga. John’s great-grandfather José’s mother, Cipriana María Soiza, was the daughter of Portuguese emigrants, João de Sousa (later Juan Soiza), of Vila Real, Vila Real, and Catarina (later Catalina) Contreras, of Olhão, Faro. John’s great-grandmother Isabel was the daughter of Luis Cayetano Bayochi, who was of half Italian and half Spanish [Andalusian] descent, and of Ana María Dolores Álvarez, who was of Spanish [5/8 Andalusian, 1/4th Valencian, and 1/8th Extremaduran] descent.

Sources: Genealogy of John Oates (focusing on his father’s side) – https://www.geni.com