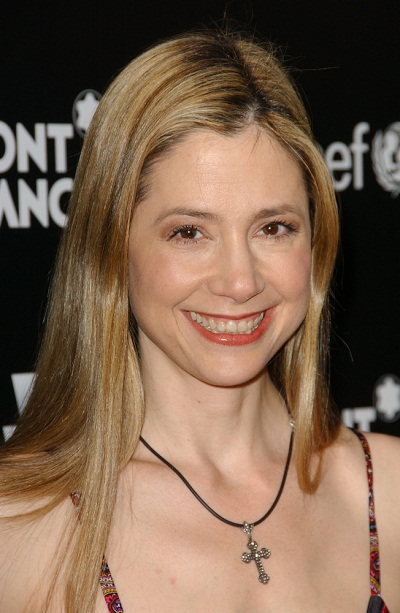 Sorvino in 2010, photo by PrPhotos

Mira Sorvino is an American actress. She won the Academy Award for Best Supporting Actress for Mighty Aphrodite (1995). Her roles also include Norma Jean & Marilyn, Romy and Michele’s High School Reunion, Mimic, The Replacement Killers, Lulu on the Bridge, At First Sight, Summer of Sam, Like Dandelion Dust, and Human Trafficking.

She is the daughter of Lorraine Ruth (Davis), a drama therapist and actress, and Paul Sorvino, an actor and opera singer. Her brother is actor and producer Michael Sorvino.

Her father was of Italian descent, with roots in Campania and Molise. Her mother is of Welsh, German, and English ancestry. Mira is married to actor Christopher Backus, with whom she has four children.

Mira’s maternal grandfather was Dr. Edwin Wallace Davis (the son of Samuel/Sam O. Davis and Katherine/Catherine/Kathline Krauss). Edwin was born in Michigan, and was an official of the National Education Association. Samuel was the son of Spencer Davis and Clarissa/Clarisa/Clara Seeley. Katherine was the daughter of Jacob Krause.