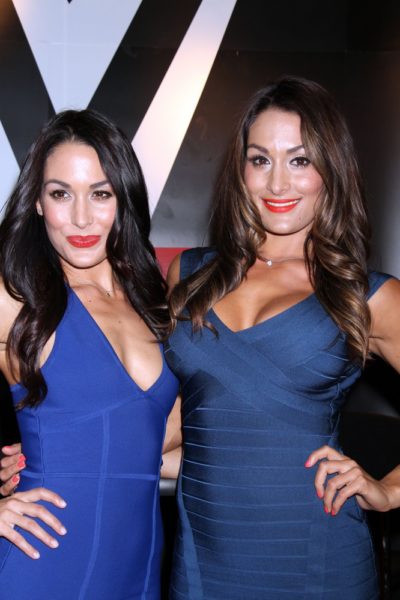 The Bella Twins in 2014, photo by Prphotos

The Bella Twins, Brie Bella and Nikki Bella, are an American professional wrestling tag team. They performed on the WWE. They are also actors and models.

The Bella Twins are the daughters of Kathy (Colace) and Jon Garcia. Their father is of Mexican descent. Their mother is of Italian descent on one side, and of English, Irish, and Scottish ancestry on the other. Their mother is from a family of entrepreneurs.

Brie is married to wrestler Daniel Bryan, with whom she has two children. Nikki has a son with her fiancé, Russian-born dancer Artem Chigvintsev.

The Bella Twins’ maternal grandmother is Alice Mary Dessert (the daughter of Raymond Bernardine/Bernardene Dessert and Jennie Cecelia/Cecilia James). Raymond was the son of Francis Adnus Dessert and Anne Chisholm, who was born in Alexandria, Ontario, Canada. Jennie was the daughter of Richard Edwin James and Alice Mary O’Connor.

A DNA test taken by Brie stated that her genetic ancestry includes:

History of the Colace family – http://www.fivecrowns.com

Genealogies of The Bella Twins’ mother (focusing on her own mother’s side) – http://www.genealogy.com