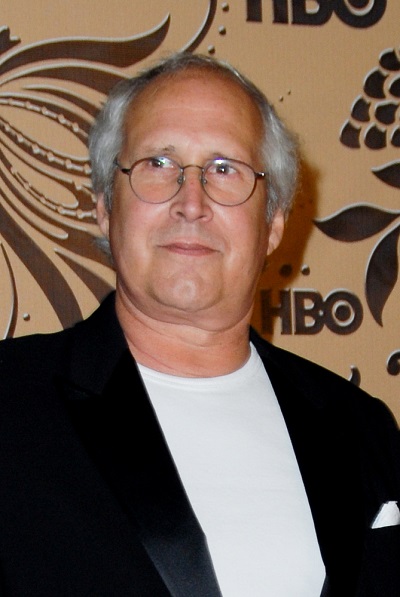 Chevy Chase is an American actor, comedian, and writer. He is known for starring on early SNL and in numerous comedy films, including Foul Play, Neil Simon’s Seems Like Old Times, Fletch, Funny Farm, and the National Lampoon’s Vacation films, particularly Christmas Vacation.

He is the son of Cathalene Parker (née Browning), a concert pianist and librettist, and Edward Tinsley Chase, a magazine writer and book editor. His parents were both from prominent families. Much of his ancestry is English, with deep Colonial American roots in New England. He also has smaller though recent amounts of Scottish and Irish, and more distant German, Swedish, and Dutch, roots. He is a Mayflower descendant. He is married to Jayni Luke, with whom he has three children.

Chevy’s paternal grandfather was Edward Leigh Chase, an artist and illustrator (the son of Charles Denison/Dennison Chase and Grace Metcalfe). Edward was born in Elkhart Lake, Sheboygan, Wisconsin. Edward’s brother was Frank Swift Chase, a painter and teacher. Chevy’s great-grandfather Charles was born in Vermont, the son of Henry Seymour Chase and Sarah Denison Haskell. Grace was the daughter of Lyne Shackelford/Shackleford Metcalfe, who was Mayor of Alton, Illinois, and of Sarah Tennery/Tenney Baker. Sarah’s father, Chevy’s great-great-great-grandfather, David J. Baker (David Jewett Baker), was a Democratic Party politician, who was a U.S. Senator from Illinois, from November 12, 1830 to December 11, 1830.

Chevy’s paternal grandmother was Mabel Penrose Tinsley (the daughter of Edward Tinsley and Laura Penrose Thornton). Mabel was born in Brooklyn, Kings, New York. Edward was the son of Theophilus Tinsley, who was born in Ireland, and of Henrietta Josephine Wortman. Laura was the daughter of Edward Thornton and Marie Penrose, who were born in England.

Chevy’s maternal grandmother was Cathalene/Catherine Isabella Parker, an opera singer (the daughter of Edward Grahame/Graham Parker and Charlotte Margaret “Lottie” Linné). Cathalene was born in San Francisco, California. Chevy’s maternal step-grandfather, who adopted Chase’s mother, was Cornelius Vanderbilt Crane, of the wealthy Crane and Vanderbilt families, and to the industrial products company Crane Co. Chevy’s great-grandfather Edward was born in Auburndale, Newton, Middlesex, Massachusetts, the son of Charles Edward Parker and Isabelle/Isabella Graham Jennings. Chevy’s great-grandmother Charlotte was the daughter of John/Johan Conrad Linné, who was born in Denmark, to a German father and a Swedish mother; and of Catherine Fitzpatrick “Kate” O’Reilly, who was born in New York, the daughter of Irish parents, Thomas O’Reilly and Margaret Fitzpatrick.

Genealogy of Chevy Chase (focusing on his father’s side) – http://worldconnect.rootsweb.ancestry.com