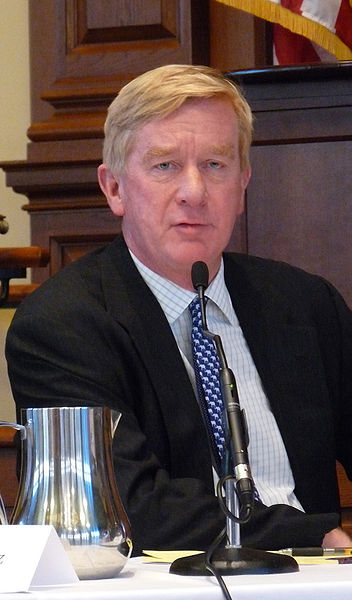 Bill Weld, also known as William Weld, is an American attorney, businessperson, author, and politician. As a Republican, he served as U.S. Attorney for the District of Massachusetts, from 1981 to 1986, U.S. Assistant Attorney General for the Criminal Division, from 1986 to 1988, and Governor of Massachusetts, from January 3, 1991 to July 29, 1997.

Bill is the son of Mary Blake (Nichols) and David Low Weld, an investment banker. His religion is Episcopalian. He is from a prominent family, with a large amount of ancestral lines that have been in the U.S., specifically Massachusetts and New York, since the 1600s.

Bill’s first cousin is novelist John Nichols. Bill is married to journalist, magazine editor, and novelist Leslie Marshall. He has five children with his former wife, professor Susan Roosevelt Weld, who is the great-granddaughter of President Theodore Roosevelt.

Bill is a patrilineal descendant of captain Joseph Weld (1599-1646), one of the founders of the prominent Boston Brahmin Weld family of Massachusetts. Among Joseph Weld’s other descendants are actress Tuesday Weld, actress and director Polly Draper, and her children, actors and musicians Nat Wolff and Alex Wolff.

Bill’s maternal grandfather was John Treadwell Nichols (the son of John White Treadwell Nichols and Mary Blake Slocum). Bill’s grandfather John was born in Boston, Suffolk, Massachusetts, and was a prominent ichthyologist and ornithologist. Bill’s great-grandfather John was the son of George Nichols and Susan Farley Treadwell. Mary was the daughter of William Henry Slocum, whose father was born in Wales, and of Sarah Elizabeth Williams.

Bill’s maternal grandmother was Cornelia duBois Floyd (the daughter of John Gelston Floyd, Jr. and Julia Floyd DuBois). Cornelia was born in Englewood, Bergen, New Jersey. John was the son of John Gelston Floyd, who was a Member of the U.S. House of Representatives from New York, from March 4, 1839 to March 3, 1843, and again, from March 4, 1851 to March 3, 1853; and of Sarah Backus Kirkland. Sarah’s father, Joseph Kirkland, Jr., a lawyer and politician, was also a congressman from New York, from December 3, 1821 to March 4, 1823, and was Mayor of Utica, New York, from 1832 to 1836. Bill’s great-grandmother Julia was the founder of the Nursery and Child’s Hospital in New York City, now in the New York Hospital-Cornell Medical Center. Her father, Cornelius DuBois, was a lawyer and tobacco merchant. Her mother was prominent sculptor and philanthropist Mary Ann Delafield, who was born in England, to an American father and an English mother, who herself was from Whitchurch, Buckinghamshire.