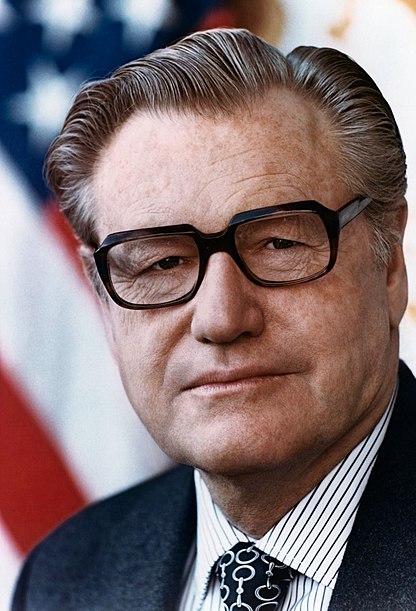 Ethnicity: English, with small amounts of Dutch, German, and Welsh

Nelson Rockefeller was an American politician, businessperson, philanthropist, and public servant. A member of the Republican Party, he served as the 41st Vice President of the United States, from December 19, 1974 to January 20, 1977. He was appointed to the position by President Gerald Ford, after Ford himself ascended from the Vice Presidency to the Presidency.

On his father’s side, Vice President Rockefeller was a nephew of Elizabeth Rockefeller Strong; philanthropist and socialite Alta Rockefeller Prentice; and socialite Edith Rockefeller McCormick. On his mother’s side, Vice President Rockefeller was a nephew of philanthropist and art collector Lucy Aldrich; Richard S. Aldrich, a lawyer and Republican Party politician, who was a Member of the U.S. House of Representatives from Rhode Island, from March 4, 1923 to March 3, 1933; and banker and financier Winthrop W. Aldrich, who was Ambassador to the U.K., from February 2, 1953 to February 1, 1957.

His ancestry was English, with small amounts of Dutch, German, and Welsh.

Vice President Rockefeller’s patrilineal ancestry can be traced to Johann Peter Rockefeller, who was born, c. 1681, in Segendorf, Rhineland, Germany, the son of Johann Rockefeller and Elizabeth Margaretha Remagen.

Vice President Rockefeller’s paternal grandmother was Laura Spelman Rockefeller (born Laura Celestia Spelman, the daughter of Harvey Buel Spelman and Lucy Henry). Laura was born in Wadsworth, Medina, Ohio, and was an abolitionist, philanthropist, and schoolteacher. Harvey was the son of Samuel Buel Spelman and Laura Seymour. Lucy was the daughter of William Henry and Rachel Frary.

Vice President Rockefeller’s maternal grandmother was Abby Pearce/Pierce Truman Chapman (the daughter of Francis Morgan Chapman and Lucy Anne Truman). Abigail was born in Connecticut. Francis was the son of Amos Chapman and Amy/Amey Morgan. Lucy was the daughter of Jonathan Truman and Mary Willett/Willet.