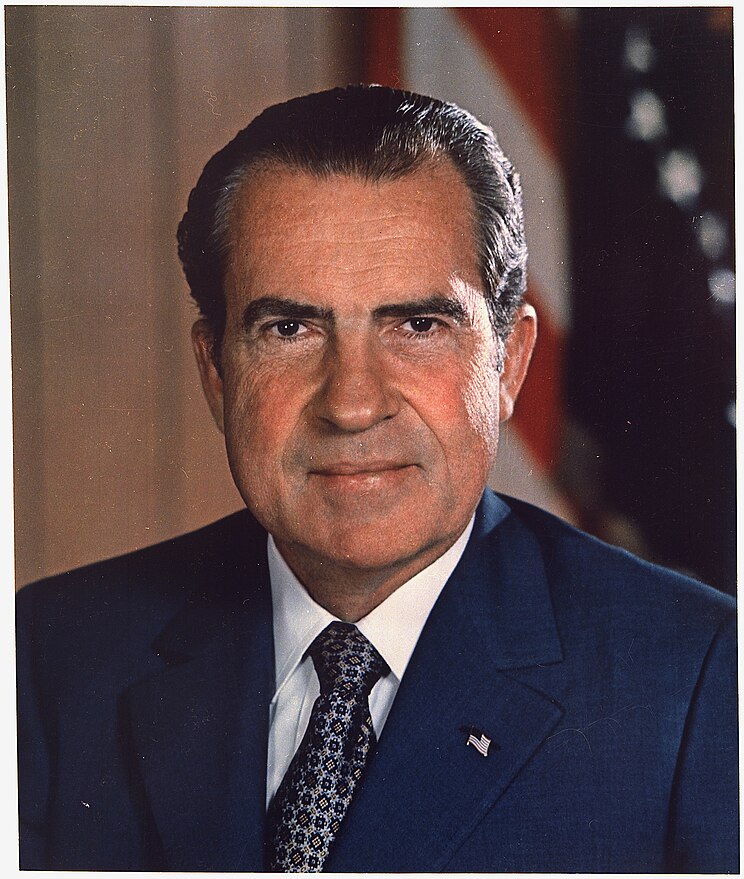 official portrait of Richard Nixon c. 1969, Department of Defense/Department of the Army/Office of the Deputy Chief of Staff for Operations. U.S. Army Audiovisual Center

He was also the Republican Party’s nominee for President of the United States in 1960.

He was Time Magazine’s Person of the Year for 1971, and for 1972 (sharing the latter award with Henry Kissinger).

President Nixon was the son of Hannah (Milhous) and Francis Anthony “Frank” Nixon. He had English, some Scots-Irish (Northern Irish), and a small/distant amount of German, Welsh, Dutch, and Swedish, ancestry, along with remote French roots. He was married to Pat Nixon (born Thelma Catherine Ryan), with whom he had two children. His granddaughter is actress Jennie Eisenhower.

President Nixon was a Quaker.

President Nixon’s patrilineal line can be traced back to James Nixon, who was born, c. 1705, in Cappagh, Tyrone, Ireland.

President Nixon’s maternal grandfather was Franklin Milhous (the son of Joshua Vickers Milhous and Elizabeth Price Griffith). Franklin was born in Ohio. Joshua was the son of William Baldwin Milhous/Milhouse and Martha Vickers. Elizabeth was the daughter of Amos Griffith and Edith Price.

President Nixon’s maternal grandmother was Almira Park Burdg (the daughter of Oliver Burdg and Jane Malmsbury Hemingway). Almira was born in Ohio. Oliver was the son of Jacob Burdg, Jr. and Miriam/Mariam Matthews. Jane was the daughter of James Hemingway, Jr. and Hope Malmsbury.

President Nixon’s matrilineal line can be traced back to Hope Gaskill, who was born, c. 1743, and to Hope’s parents, Jonathan Gaskill and Jane Shinn.