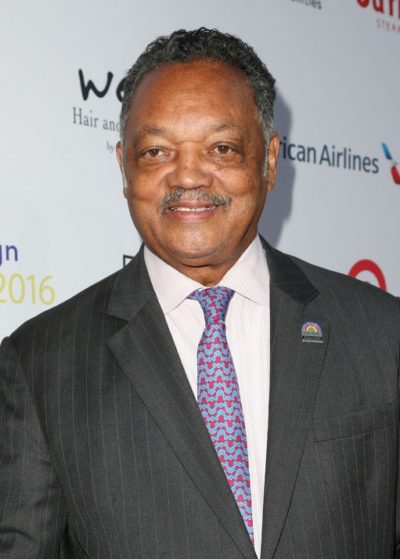 Jackson in 2016, photo by Prphotos

Jesse Jackson is an American civil rights activist, Baptist minister, and politician. A member of the Democratic Party, he served as United States Shadow Senator from the District of Columbia, from January 3, 1991 to January 3, 1997.

He was a candidate for the Democratic Party’s nomination for President of the United States in 1984 and 1988.

Jesse is the son of Helen (Burns) and Noah Louis Robinson, a professional boxer and textile brokerage employee. He was raised by his mother and stepfather, Charles Henry Jackson, whose surname he took. He considers both men to be his fathers.

Jesse is married to Jacqueline Brown. He has six children: five, including singer and political commentator Santita Jackson, politician Jesse Jackson, Jr., and businessperson and social justice advocate Jonathan Jackson, with Jacqueline; and a daughter with Karin Stanford. Jesse Jackson, Jr. is a Democratic politician, who was a Member of the U.S. House of Representatives from Illinois, from December 12, 1995 to November 21, 2012.

Kamala Harris, whose father is Jamaican, began serving as Vice President of the United States in 2021.