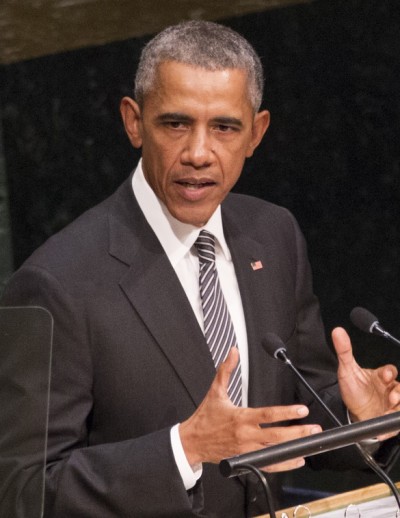 Barack Obama is an American politician. A member of the Democratic Party, he served as the 44th President of the United States, from January 20, 2009 to January 20, 2017. He was elected to the position in 2008 and 2012. He was previously a Member of the Illinois Senate, from January 8, 1997 to November 4, 2004, and a U.S. Senator from Illinois, from January 3, 2005 to November 16, 2008. He was awarded the Nobel Prize for Peace in 2009. Barack Obama is the first person of significant African descent to have served as President of the United States. He is also the only person born in the 1960s to have won a major party’s presidential caucus and/or primary, and the only U.S. President born after the 1940s (thus far).

President Obama was born in Honolulu, Hawaii, U.S. His father was black and his mother was white. His father, Barack Hussein Obama, a governmental economist, was born in Kanyadhiang Village, Rachuonyo, Kenya, and was a Kenyan of the Luo tribe. His mother, Stanley Ann (Dunham), an anthropologist, was born in Wichita, Sedgwick, Kansas, and had English, and small amounts (to varying degrees) of Scottish, Irish, German, Welsh, Swiss-German, and French Huguenot, ancestry. His father was a Muslim and his mother was from a family of non-practicing Baptists and Methodists. President Obama practices Protestant Christianity.

President Obama is married to lawyer and writer Michelle Obama (born Michelle LaVaughn Robinson). Their children are Malia Obama and Sasha Obama. He lived in Indonesia from six to ten years old.

President Obama’s matrilineal line can be traced to Sarah Wade “Sally” Ray, who was born, c. 1793, in Virginia.

President Obama is the fourth black American to have won a caucus and/or primary for a major American political party’s presidential nomination, having won 29+ states in 2008, and 50+ states in 2012. The previous winners are:
*Walter E. Fauntroy (1972; Democratic; won Washington, D.C.)
*Shirley Chisholm (1972; Democratic; won 3 contests, including New Jersey)
*Jesse Jackson (Democratic; in 1984, he won 2+ states; in 1988, he won 9+ states)

President Obama has distant Irish ancestry, going back to his great-great-great-grandfather, Falmouth/Fulmoth Kearney, who arrived in the States in 1850, from Moneygall in Ireland. Research done by a team of genealogists has suggested that President Obama’s mother had remote African-American ancestry (in the 1600s), through possible descent from a slave named John Punch.

In page 13 of his autobiography, Dreams from My Father: A Story of Race and Inheritance, 1995, President Obama writes that a distant ancestor of his mother’s “had indeed been a full-blooded Cherokee” [Native American]. No Cherokee Native American ancestry has yet been documented/verified for President Obama.

President Obama has referred to his mother’s ancestors as “Scotch-Irish mostly,” though their ancestry was predominantly English, with a smaller amount of Scots-Irish.