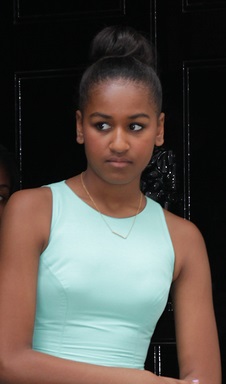 Malia Obama in 2015, photo by wfpa/Bigstock.com

Malia Obama and Sasha Obama are the daughters of the 44th President of the United States, Barack Obama, and of lawyer and writer Michelle Obama. Their uncle (mother’s brother) is college basketball coach and broadcaster Craig Robinson (not the actor of the same name).

Three of their grandparents were/are black, while their paternal grandmother was white.

Malia and Sasha’s paternal grandfather was Barack Hussein Obama (the son of Onyango and Habiba/Habibah Akumu/Akkumu Nyanjango/Nyanjoga). Malia and Sasha’s grandfather Barack was born in Kanyadhiang Village, Rachuonyo, Kenya, and was a governmental economist, who was of the Luo tribe. Onyango’s name was changed to Hussein Onyango Obama; he was the son of Obama and Nyaoke. Habiba was the daughter of Njango/Njoga and Bwogi Otore.

Malia and Sasha’s maternal grandmother is Marian Lois Shields (the daughter of Purnell Shields and Rebecca Jumper/Coleman). Marian was born in Chicago, Cook, Illinois. Purnell was the son of Robert Lee/Leacel Shields and Annie/Anna/Anne Lawson/Laws. Rebecca was the daughter of James Jumper and Eliza Tinsley.

Malia and Sasha’s father has distant Irish ancestry, going back to his great-great-great-grandfather, Falmouth Kearney, who arrived in the States in 1850, from Moneygall in Ireland. Research done by a team of genealogists has suggested that Malia and Sasha’s paternal grandmother had remote African-American ancestry (in the 1600s), through possible descent from a slave named John Punch.

Malia and Sasha’s maternal great-great-grandmother Rose Ella Cohen had the usually Jewish surname Cohen. Rose was an African-American woman, whose father, Caesar/Sesar Cohen, was also African-American. It is not clear where the Cohen surname originates in this family, or if Caesar Cohen had Jewish ancestry of some kind.

Genealogy of Malia Obama and Sasha Obama (focusing on their father’s side) – http://www.wikitree.com

Genealogy of Malia and Sasha’s mother (focusing on her own father’s side) – http://www.wargs.com

Pictures and some of Malia and Sasha’s mother’s family history – http://www.dailymail.co.uk