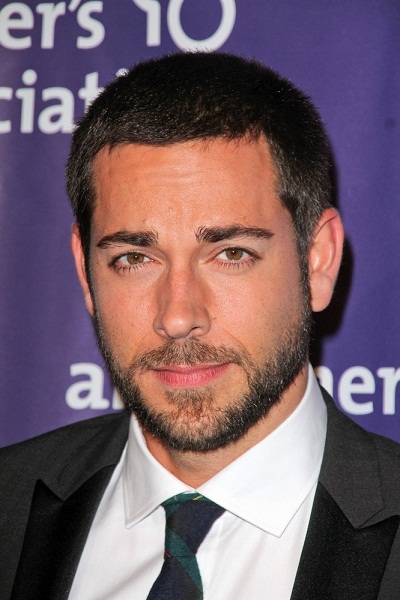 Zachary Levi is an American actor, comedian, and singer. He plays Shazam! in the DC Cinematic Universe, and has also starred in Chuck, American Underdog, and the Thor films, as well as in Broadway roles.

Zachary was born Zachary Levi Pugh, and is the son of Susan Marie (Hoctor) and Darrell Pugh. His birth name is pronounced pew. He has English, Irish, French, German, Welsh, Scottish, Northern Irish, Swiss [Swiss-French and Swiss-German], and remote Dutch, ancestry. Several of his family lines go back to Colonial America.

Zachary uses his middle name as his stage name, as he believed “Pugh” was too unusual-sounding. A decade after he became a known actor, English actor siblings Toby Sebastian (born Sebastian Toby Pugh) and Florence Pugh, who are not related to Zachary, also became well-known; Florence kept the surname, while Toby, like Zachary, uses his first two names (though in reverse order).

Zachary is sometimes incorrectly believed to be Jewish, because of his middle/stage name Levi. He is not of Jewish heritage or religion, and is a devout Christian.

Zachary’s patrilineal line evidently traces back to Francois De Puy, a Huguenot from Calais, France, and to his Dutch wife, Geertje Willemse Van Boerum, who was from Amsterdam.

Zachary’s paternal grandfather was Alton Lester Pugh (the son of Herman Lester Pugh and Delila/Delliah Mae Lovin, whose family’s surname was originally Loving). Alton was born in Kansas. Herman was the son of Martin Shaner Pugh and Jane/Jennie Louise/Louisa/Louis Clason. Delila was the daughter of Robert Lee Lovin and Mary Ellen Montgomery.

Zachary’s maternal grandmother was Patricia Lee “Pat” Jones (the daughter of John Ralph Jones and Juliet Louise Schenck). Patricia was born in Missouri. John was the son of Lewis R. Jones, whose father was Welsh and whose mother was German, and of Anna/Annie Coughey, whose parents were Irish. Juliet was the daughter of Henry B. Schenck and Wilhelmina M. Minnie/”Mamie” Kuehl, and her grandparents were all German.

Genealogy of Zachary’s paternal great-grandfather, Herman Lester Pugh (focusing on his own mother’s side) – http://worldconnect.rootsweb.ancestry.com

Genealogy of Zachary’s mother (focusing on her father’s side) – https://wc.rootsweb.com