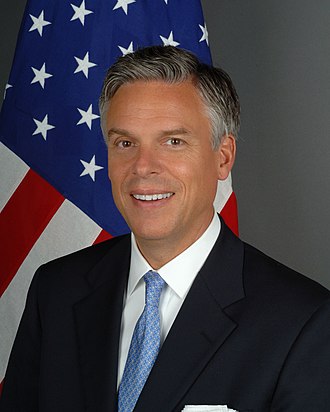 An AncestryDNA test taken by Jon’s daughter Abby whose results were displayed on the show The View (2018) stated that Abby’s genetic ancestry is:

Jon is a member of the LDS (Mormon) faith.

Jon’s maternal grandfather was David B. Haight (David Bruce Haight, the son of Hector Caleb Haight and Clara Josephine Tuttle). Jon’s grandfather David was born in Idaho, and was a member of the Quorum of the Twelve Apostles of the LDS church. Hector was the son of Horton David Haight and Louisa Leavitt. Clara was the daughter of Norton Ray Tuttle and Helen/Hellen Elizabeth Utley. Through his Haight line, Jon is a fourth cousin, once removed, of musician Nikki Six. Jon’s maternal great-great-great-great-grandparents, Caleb Haight and Keturah Horton, were also Nikki’s three times maternal great-grandparents.

Jon is one of several people of heavily Scandinavian ancestry to have run plausible or semi-plausible campaigns for a major political party’s nomination for President of the United States. Of these candidates, several have won a major party’s caucus and/or primary. They are:
*Earl Warren (who sought the 1936, 1944, 1948, and 1952 Republican nominations; each time, won 1 state, California)
*Charles A. Christopherson (who sought the 1944 Republican nomination; won 1 state, South Dakota; Christopherson’s parents were Norwegian)
*Hubert Humphrey (Democratic; in 1952, he won 1 state, Minnesota; in 1960, he won 2 states; in 1972, he won 5 states)
*Joe Foss (who sought the 1956 Republican nomination; won 1 state, South Dakota; Foss’s father was of Norwegian descent)
*Henry M. Jackson (Democratic; ran in 1972 and 1976: in 1976, he won 4 contests; Jackson’s parents were Norwegian)
*Walter Mondale (1984, the year he was nominated; Democratic; won 20 contests)