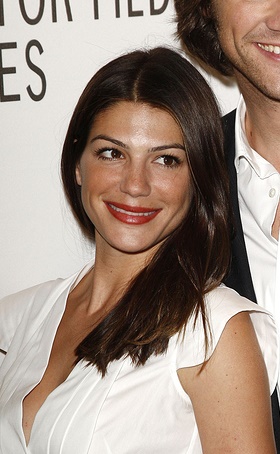 Cortese in 2011, photo by Joe Seer/bigstock.com

Genevieve Cortese is an American actress. She has appeared on the television series Supernatural and Wildfire. At the age of thirteen, she moved with her family to Montana, and later to Sun Valley, Idaho. Genevieve is married to actor Jared Padalecki, with whom she has three children. She has also been credited as Genevieve Padalecki and Jennifer Cortese.

Genevieve’s paternal grandmother is Joanne Alice/Alyce Schneider (the daughter of Edward Alexander Schneider and Genevieve Alice Elfen). Edward was the son of Edward J. Schneider and Julia Distelhorst, who were born in New York, to German parents, with Edward’s parents being from Saxony. Genevieve’s great-grandmother Genevieve was the daughter of Harry A. Elfen and Alice Sohst, both of whom had German immigrant fathers.

Genevieve’s maternal grandmother is Patricia W. Dufour (the daughter of Wilson Joseph Dufour and Oma Odell Fuller). Wilson was the son of Joseph Norman Dufour and Rose Herron. Oma was the daughter of Buford Lonnie Fuller and Eugenie Corine Edwards.