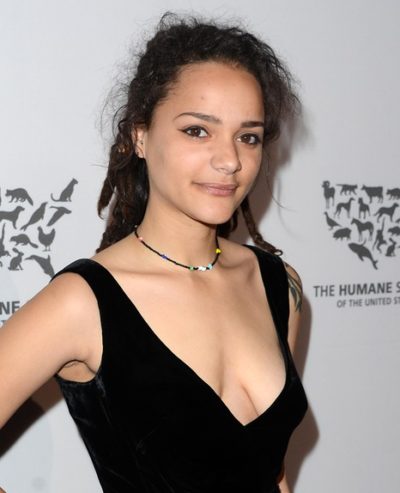 Lane in 2016, photo by kathclick/Bigstock.com

Sasha Lane is an American actress. She is known for her roles in the films American Honey (2016) and The Miseducation of Cameron Post (2018), among others.

She was born in Houston, Harris, Texas, the daughter of Judith and Kenneth Lane. Her father is an American, who is African-American. Her mother is a New Zealander. Sasha was raised in Frisco, Texas. Pictures of Sasha with her mother can be seen here and here.

Sasha’s maternal grandfather was John Stanley D’Arcy Tuck (the son of Stanley Palmer Tuck and Margherita Ethel D’Arcy, also known as Stella Margaret Ethel Patricia D’Arcy). John was born in Taumarunui. Sasha’s great-grandfather Stanley was the son of John Thomas Tuck, whose father was from Happisburgh, Norfolk, England, and whose mother was from Lanarkshire, Scotland; and of Mary Alice Gardner, whose own father was American, from Connecticut. Sasha’s great-grandmother Margherita’s father was Herbert Henry D’Arcy, whose own father was from Durham, England and whose mother was of Scottish and Northern Irish descent. Sasha’s great-grandmother Margherita’s mother was Margherita Paulina “Lizzie” de Cortando, whose own father, Cecil Augustus Victor Hotezzi de Cortando (aka Cecil Augustus Curtis), baron von Blaremberg, was from Oldenburg in Schleswig-Holstein, Germany, and was descended from Italian, German, French, and Russian nobility, and painters in Flemish Belgium, and whose own mother had roots in Bedfordshire, England.

Sasha’s maternal grandmother is Denise Lesley Morris (the daughter of Harold Lesley/Leslie Morris and Winifred Ann Roucher). Sasha’s great-grandfather Harold was the son of Frederick Ernest Morris, whose father was from Lewes, Sussex, England and whose mother was from Cornwall, England; and of Emma Matuschka, whose parents were from Germany, with roots in Brandenburg; her mother had Sorbian ancestry, from Osnabruck. Sasha’s great-grandmother Winifred was the daughter of Louis/Lewis Roucher/Reucher and Mary Frances Jane “Sissy” Stokes, whose paternal grandparents were from Branston, Leicestershire and whose own mother was from Kent, England.