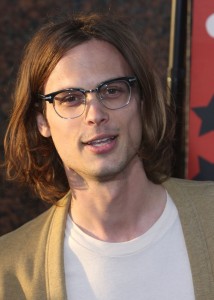 Matthew Gray Gubler is an American actor, filmmaker, fashion model, painter, illustrator, director, and author. He is known for his role on the show Criminal Minds.

Matthew’s paternal grandfather was Vivian Gray Gubler (the son of John G. Gubler and Alyce Wilhelmina/Wilomina Gray). Vivian was born in Utah. John was born in Utah, to a Swiss-born father, Herman Gubler, from Muellheim, Thurgau, and to a mother, Selina Gubler, who was born in Utah, to Swiss parents, from Thurgau, at least including Muellheim. Alyce was born in Utah. Alyce’s father, William Alden Gray, had English ancestry, and was from a family that had lived in the United States since the 1600s, on many of his ancestral lines. Alyce’s mother, Anna Barbara Graf, was Swiss. Vivian’s Swiss lines were of Swiss-German ancestry.

Matthew’s maternal grandfather was Maxwell S. Kelch (the son of George H. Kelch and Margaret M. Maxwell). Matthew’s grandfather Maxwell was born in California. George was born in Illinois. George’s parents, Francis J. Kelch and Elizabeth Bitzel, were both born in Illinois, and all of George’s grandparents were German immigrants. Margaret was born in Ohio, the daughter of William F. Maxwell and Amanda C. Dinsmore, and had Scottish and English ancestry.