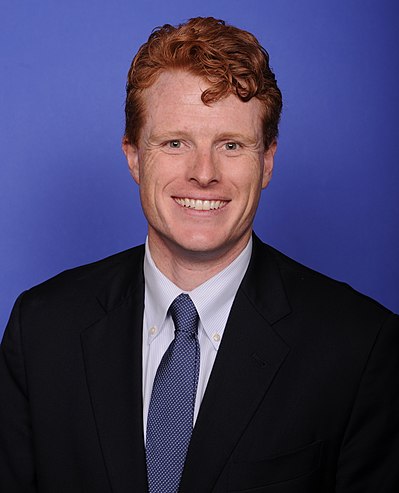 Joe Kennedy III is an American lawyer and politician. A member of the Democratic Party, he served as a Member of the U.S. House of Representatives from Massachusetts, from January 3, 2013 to January 3, 2021.

Joe is the son of Sheila Brewster (Rauch) and Joseph P. Kennedy II (Joseph Patrick Kennedy II), a businessperson and Democratic Party politician, who was a Member of the U.S. House of Representatives from Massachusetts, from January 3, 1987 to January 3, 1999. He was raised in Brighton and Marshfield, Massachusetts. Joe comes from a long line of activists and Democratic politicians. Joe’s paternal grandfather was Robert F. Kennedy, a politician, who was the U.S. Attorney General, from January 21, 1961 to September 3, 1964, and a U.S. Senator from New York, from January 3, 1965 to June 6, 1968, when he was assassinated. Joe’s grandfather was also a candidate for the Democratic Party’s nomination for President of the United States in 1968, until his death.

Joe is married to health policy lawyer Lauren Birchfield, with whom he has two children.

Among Joe’s grandfather Robert’s siblings, of whom Joe is a great-nephew, were John F. Kennedy, who was President of the United States, from January 20, 1961 to November 22, 1963, Ted Kennedy, who was also a politician, and activist and humanitarian Jean Kennedy Smith, who was Ambassador to Ireland, from June 24, 1993 to September 17, 1998. Through his Kennedy ancestry, Joe is a first cousin, once removed, of John F. Kennedy, Jr. and journalist Maria Shriver, and a second cousin of author Katherine Schwarzenegger, Jack Schlossberg, and actor and model Patrick Schwarzenegger.

Joe’s paternal grandfather was Robert Francis Kennedy (the son of Joseph Patrick Kennedy and Rose Elizabeth Fitzgerald). Robert was born in Massachusetts. Joseph and Rose were of Irish descent, and Joe’s grandfather also had remote Scottish roots. His patrilineal Kennedy line traces back to Scotland, and Joe had Scottish-born ancestors in the 1600s. Joe’s great-grandfather Joseph was a businessperson, investor, and politician, who was the son of P. J. Kennedy (Patrick Joseph Kennedy), a businessperson and politician, with roots in Dunganstown, and of Mary Augusta Hickey, whose roots were in Cork, Munster, and Rossearbery. Joe’s great-grandmother Rose was a philanthropist and socialite. Rose’s father, Joe’s great-great-grandfather, John Francis “Honey Fitz” Fitzgerald, was a Democratic politician, who served as Mayor of Boston, from January 1, 1906 to January 6, 1908, and again, from February 7, 1910 to February 2, 1914; and as a Member of the U.S. House of Representatives from Massachusetts, from March 4, 1895 to March 3, 1901, and again, from March 4, 1919 to October 23, 1919. John’s roots were in Co. Limerick, including Lough Cur. Rose’s mother was Mary Josephine “Josie” Hannon, whose roots were in Lough Cur and Bruff.

Joe’s paternal grandmother was Ethel Skakel (the daughter of George Jordan Skakel and Ann Brannack). Ethel was born in Illinois, and is a human rights campaigner. George was a prominent businessperson, who founded the Great Lakes Carbon Corporation. George was the son of James Curtis Skakel and Grace Mary Jordan. Ann was of Irish origin, and was the daughter of Joseph/Joe Brannack and Margaret Byrnes.

Genealogy of Joe’s father (focusing on his own father’s side) – https://worldconnect.rootsweb.ancestry.com

Genealogy of Joe’s paternal grandfather, Robert F. Kennedy (focusing on his own father’s side) – https://worldconnect.rootsweb.ancestry.com