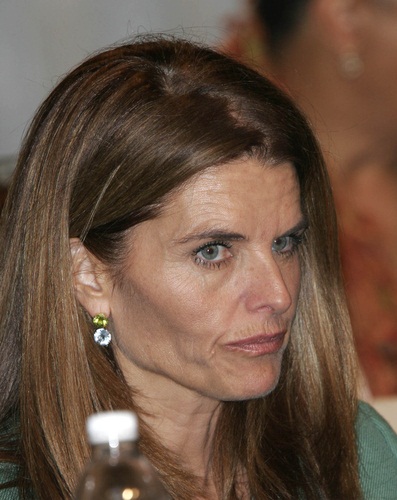 Maria Shriver is an American journalist, activist, and writer.

Maria is the daughter of Eunice Mary (Kennedy) and Sargent Shriver (Robert Sargent Shriver). Her father was the 21st United States Ambassador to France, the 1st Director of the Peace Corps, and the Democratic Party’s nominee for Vice President of the United States in 1972. Her uncles (her mother’s brothers) were John F. Kennedy, who was President of the United States, from January 20, 1961 to November 22, 1963, Robert F. Kennedy, and Ted Kennedy, both of whom were also politicians, and her aunt (mother’s sister) was activist and humanitarian Jean Kennedy Smith, who was Ambassador to Ireland, from June 24, 1993 to September 17, 1998. Her first cousin was journalist John F. Kennedy, Jr., and her first cousins, once removed, are politician Joe Kennedy III and Jack Schlossberg. Maria has four children with her former husband, actor and politician Arnold Schwarzenegger, including author Katherine Schwarzenegger and actor, model, and entrepreneur Patrick Schwarzenegger. Katherine is married to actor Chris Pratt.

Maria’s patrilineal line can be traced to Lorenz Schreiber, who was born, c. 1630, in Enkenbach-Alsenborn, Rheinland-Pfalz, Germany.

Maria’s paternal grandmother was Hilda Shriver (the daughter of Thomas Herbert Shriver and Elizabeth Rosalia/Rosalie Lawson). Hilda was born in Maryland. Thomas was the son of William Shriver and Mary Margaret Josephine Owings/Owing. Elizabeth was the daughter of Robert Lawson and Margaret Quinn.

Maria’s maternal grandfather was Joseph Patrick “Joe” Kenndy (the son of P. J. Kennedy, Patrick Joseph Kennedy, and of Mary Augusta Hickey). Maria’s grandfather Joseph was born in East Boston, now Boston, Suffolk, Massachusetts, and was a businessperson, investor, and politician. Maria’s great-grandfather P. J. was a businessperson and politician, who was the son of Patrick Kennedy and Bridget Murphy, who were from Dunganstown, County Wexford, Ireland. Mary was the daughter of James Hickey, who was from Newmarket-on-Fergus, County Clare, Ireland, and of Margaret Martha Field, who was from Rosscarbery, County Cork, Ireland.

Maria’s paternal grandmother was Rose Elizabeth Fitzgerald (the daughter of John Francis “Honey Fitz” Fitzgerald and Mary Josephine “Josie” Hannon). Rose was born in Boston, Suffolk, Massachusetts, and was a philanthropist and socialite. Maria’s great-grandfather John was born in Massachusetts, and was a Democratic politician, who served as Mayor of Boston, from January 1, 1906 to January 6, 1908, and again, from February 7, 1910 to February 2, 1914; and as a Member of the U.S. House of Representatives from Massachusetts, from March 4, 1895 to March 3, 1901, and again, from March 4, 1919 to October 23, 1919; he was the son of Thomas Fitzgerald and Rosanna Cox, who were born in Co. Limerick, Ireland. Maria’s great-grandmother Mary Josephine was the daughter of Michael Hannon, who was born in Lough Gur, Ireland, and of Mary Ann Fitzgerald, who was from Bruff, Limerick, Ireland.

Genealogy of Maria Shriver (focusing on her own mother’s side) – http://worldconnect.rootsweb.ancestry.com

Genealogy of Maria’s mother (through her own brother, John F. Kennedy) – http://famouskin.com

Genealogy of Maria’s mother (through her own brother, John F. Kennedy) (focusing on her father’s side) – https://worldconnect.rootsweb.ancestry.com