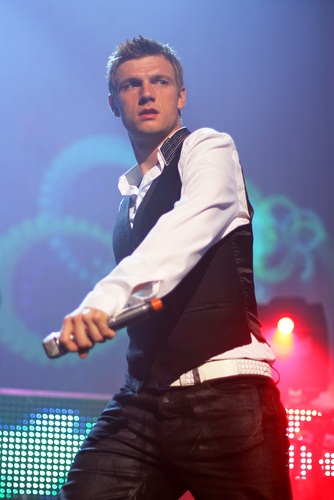 Nick Carter is an American singer, songwriter, dancer, and actor. He is a member of the band Backstreet Boys, along with Howie D., Brian Littrell, AJ McLean, and Kevin Richardson.

Nick is the son of Jane and Robert Carter. His siblings were actor and singer Aaron Carter and pop singer Leslie Carter. Nick is married to fitness trainer Lauren Kitt, with whom he has three children.

Nick has stated that the surname Carter is from his paternal step-grandfather, Charles C. Carter. Charles and Nick’s grandmother Barbara married in 1953, after Nick’s father was born. Charles was born in Tennessee, the son of Charles T./C. “Charlie” Carter and Vera Marie Kimbrough.

Nick’s paternal grandmother was Barbara Jean Latta (the daughter of Clifford Edward Latta and Margaret Mary/Helen Kieffer). Barbara was born in New York. Clifford was the son of John Emerson Latta and Jessie Elizabeth Badders. Margaret was the daughter of Harry Kieffer, whose parents were Luxembourgish, and of Dora Mable Staller.

Nick’s maternal grandfather was Charles Douglas Spaulding (the son of Sherman W. Spaulding and Theresa E. Phillips). Charles was born in Pennsylvania. Sherman was the son of Ira Porter Spaulding and Caroline M. Campbell. Theresa was the daughter of Harry Wesley Phillips and Amanda Melvinia/Melvina Crippen.

A MyHeritage DNA test taken by Nick stated that his genetic ancestry is:

Another version of the MyHeritage test listed Nick’s genetic ancestry as:

Genealogy of Nick Carter (focusing on his father’s side) – https://www.wikitree.com

Genealogy of Nick’s father (focusing on his own mother’s side) – https://old.findagrave.com

Genealogy of Nick Carter (focusing on his mother’s side) – http://familypedia.wikia.com